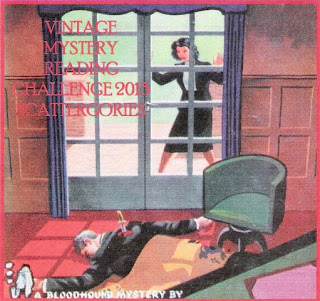 1. Colorful Crime: a book with a color or reference to color in the title
2. Murder by the Numbers: a book with a number, quantity in the title
3. Amateur Night: a book with a "detective" who is not a P.I.; Police Officer; Official Investigator (Nurse Keate, Father Brown, Miss Marple, etc.)
4. Leave It to the Professionals: a book featuring cops, private eyes, secret service, professional spies, etc.
5. Jolly Old England: one mystery set in Britain
6. Yankee Doodle Dandy: one mystery set in the United States
7. World Traveler: one mystery set in any country except the US or Britain
8. Dangerous Beasts: a book with an animal in the title (The Case of the Grinning Gorilla; The Canary Murder Case; etc.)
9. A Calendar of Crime: a mystery with a date/holiday/year/month/etc. in the title (Hercule Poirot's Christmas, Holiday Homicide, etc.)
10. Wicked Women: a book with a woman in the title--either by name (Mrs. McGinty's Dead) or by reference (The Case of the Vagabound Virgin)
11. Malicious Men: a book with a man in the title--either by name (Maigret & the Yellow Dog) or by reference (The Case of the Haunted Husband)
12. Murderous Methods : a book with a means of death in the title (The Noose, 5 Bullets, Deadly Nightshade, etc).
13. Staging the Crime: a mystery set in the entertainment world (the theater, musical event, a pageant, Hollywood, featuring a magician, etc)
14. Scene of the Crime: a book with the location of the crime in the title (The Body in the Library, Murder at the Vicarage, etc.)
15. Cops & Robbers: a book that features a theft rather than murder
16. Locked Rooms: a locked-room mystery
17. Country House Criminals: a standard (or not-so-standard) Golden Age country house murder
18. Murder on the High Seas: a mystery involving water
19. Planes, Trains & Automobiles: a mystery that involves a mode of transportation in a vital way--explicitly in the title (Murder on the Orient Express) or by implication (Death in the Air; Death Under Sail) or perhaps the victim was shoved under a bus....
20. Murder Is Academic: a mystery involving a scholar, teacher, librarian, etc.  OR set at a school, university, library, etc.
21. Things That Go Bump in the Night: a mystery with something spooky, creepy, gothic in the title (The Skeleton in the Clock, Haunted Lady, The Bat, etc.)
22. Repeat Offenders: a mystery featuring your favorite series detective or by your favorite author (the books/authors you'd read over and over again) OR reread an old favorite
23. The Butler Did It...Or Not: a mystery where the butler is the victim, the sleuth....(gasp) the criminal....or is just downright memorable for whatever reason.
24. A Mystery By Any Other Name: any book that has been published under more than one title (Murder Is Easy--aka Easy to Kill [Christie]; Fog of Doubt--aka London Particular [Christianna Brand], etc.)
25. Dynamic Duos: a mystery featuring a detective team--Holmes & Watson, Pam & Jerry North, Wolfe & Goodwin, or....a little-known team that you introduce to us.
26. Size Matters: a book with a size or measurement in the title (Death Has a Small Voice, The Big Four, The Weight of the Evidence, etc.)
27. Psychic Phenomena: a mystery featuring a seance, medium, hypnotism, or other psychic or "supernatural" characters/events
28. Book to Movie: one vintage mystery that has appeared on screen (feature film or TV movie).
29. The Old Bailey: a courtroom drama mystery (Perry Mason, anyone? Witness for the Prosecution...etc.) OR a mystery featuring a judge, lawyer, barrister, D.A., etc.
30. Serial Killers: Books that were originally published in serial format, probably from the pulp era.  Frank Packard's works come to mind.
31. Killed in Translation: Works that originally appeared in another language and have been made available in English (works published in English post-1960 would be acceptable, provided the original was published pre-1960).  Georges Simeon's works come to mind. OR If your native language is not English, then works that originally appeared in English and have been made available in your native language (same dating rules apply).
32.  Blondes in Danger:  A variation on "Colorful Crime".  Books that feature a blonde in the title role, like The Blonde Died First, or Blonde for Danger.
33. International Detectives.  A variation on "World Traveler" but instead of the crime being set in another country, the detective is not from the US or UK.   This may include Hercule Poirot as well as such notables as Judge Dee,
34. Somebody Else's Crime:  Read one book that someone else has already reviewed for the Vintage Mystery Challenge.
35. Genuine Fakes: Authors who wrote under a pseudonym (Josephine Tey [Elizabeth Mackintosh]; Nicholas Blake [Cecil Day Lews]; etc)

36. Hobbies Can Be Murder: A mystery that involves a hobby in some way: stamp or coin collecting; knitting (a la Patricia Wentworth's Miss Silver); bird watching; hunting (particularly the British hunt); scrapbooks; etc.  [thanks to S from Snaps and Snippets for the idea]

37. Get Out of Jail Free: This is a freebie category.  One per customer.  You tell me what special category the book fits ("It's got an awesome cover!"..."First book I grabbed off my shelf") and it counts.  Only thing I won't take is "It's a Vintage Mystery!"--that's a given. :-)


*Strong Poison does feature a seance. It's all pretend, the work of Miss Climpson. But it's so memorable and it works really well. And I'm unlikely to ever ever read any mystery where it's presented as "real."

Congratulations, Becky! Outstanding list...and way over the 16 needed for an automatic prize. Send me an email at phryne1969 AT gmail DOT com if you'd like to claim it.

Bev, Hi! I claimed a prize when I reached sixteen but kept reading anyway!