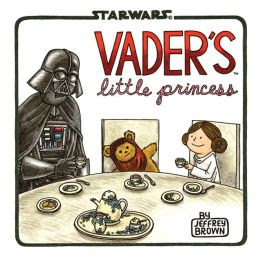 I read this one several times. Most pages stand alone; the book is more a collection of comic strips than a graphic novel telling one, big story. The premise behind this one and in Jeffrey Brown's previous book, Darth Vader and Son, is simple. Brown has reimagined the evil Darth Vader as a single dad raising two kids. He's still evil, but, he's actively involved with Luke and Leia's upbringing. Some pages are hilarious and just fun. Others not so much. I think there is something for everyone to enjoy, however! 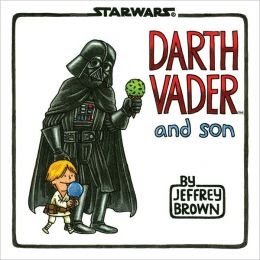 I read Darth Vader and Son after reading Vader's Little Princess. I really, really, really enjoyed both books very much. However, I must say that I laughed more with this first book. I liked the parenting advice. I liked how they used or nearly used, I should say, direct quotes from the trilogies and gave the words a whole new meaning! For example, "This is not the toy you are looking for..." instead of "This is not the droid you are looking for." (It was also fun seeing WHICH toy it was (Jar Jar). These comic strips are just fun. I'd recommend these easily!

Roan Novachez, our young hero, desperately wants to be accepted into the pilot academy. It is not to be. Just when Roan thinks he'll be stuck on Tatooine forever, he receives a letter he wasn't expecting. Been accepted into Jedi School, he has. A student of Master Yoda, he will be. He goes. He tries. He really tries. But the other younglings have been using the force for years, have grown up knowing or at least hoping to become Jedi. It is their first choice, not second choice or last choice for a vocation. The book is a blend of journal entries and comic strips. The book captures his awkwardness of growing up and adapting to new situations with a generous dose of humor.

I liked it. There were definitely some funny scenes in it. I'm not sure I LOVED it however. 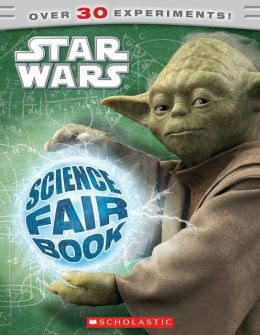 This is an interesting book for upper elementary on up. (The recommended age is 10 and up.) The introduction reads:


Have you ever wondered how much of the science-fiction world of Star Wars is based on real-life science? Are some of the situations in the films possible or simply part of a fantastic story? Now you have a chance to find out. In this book we've pulled together an assortment of experiments and activities that examine the science of Star Wars. Some of the experiments are inspired by the planets, creatures, droids, and technology from the films, and some go a step further to answer related scientific questions you'll find exciting and fun. Perhaps one day you'll find yourself on a path toward becoming a scientist and explorer of galaxies far, far away! May the Force be with you!

The book is a step-by-step guide to experimenting. Sometimes they give clues about the results, other times not a bit. Here's an idea of the types of experiments to expect:

It is oh-so-easy to recommend the TV special, Empire Strikes Out. It has some great scenes in it! And the Darth Vader and Darth Maul scenes work so much better in the special than they do in the book! But the book is nice. It's a typical novelization. I do like seeing the mostly-Lego illustrations, however.
You might be able to catch part of it online.

I managed to read this one at last. I'd started it a few years ago, but I thought the writing was so poor in the opening chapter or two that I just wasn't motivated to continue on. As soon as the action really begins, once Luke Skywalker is introduced, this one gets much better! That is not to say that reading the story adds anything substantive and wonderful to the movie experience. I think an appreciation of the movie is a big help. It helps to make sense of the text of the book. There are some pages that are a bit messy--jumping back and forth between characters and locales. It makes complete sense if you are familiar with the movie, if you know the order of things. But transitions of points of views isn't all that well done.

Years ago, I read other Star Wars novels including a novelization of the second movie. That book added SO MUCH to the story, really filled in anything and everything I wanted in terms of characterization and motivation and intent. This one, not as much. Still, it was a fun read.

This one was good for the most part. I enjoyed reading it, noticing the tiny differences between the book and the movie. I was looking for any differences in dialogue between the two. I was in particular watching the developing romance between Han and Leia. Another relationship I was paying attention to is Yoda and Luke. I was looking for something more, little things, perhaps, that made the book add something to the overall Star Wars experience. I will say I liked this one. It had a few confusing moments now and then, again with the transitions, for the most part I liked it though.

The dialogue was truly awful in places in this one. Once I gave myself permission to skip entire sections of dialogue of certain characters, I began to enjoy it a little bit. There was much to suffer through in this one, but, it had a few scenes that made it all worth while! The writing I felt wasn't wonderful, if these books in the trilogy weren't movies, I'm not sure they'd be anything fantastic to recommend them, to make them classics. 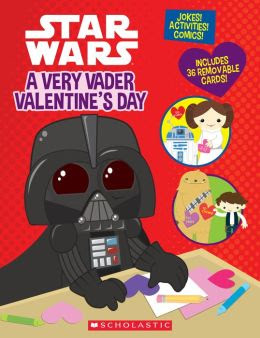 What can you expect from this one? A silly introduction, a tribute to five friendships, two pages of awful jokes, four comic strips, two word search puzzles, a maze puzzle, a mad lib, two how-to-draw features, and thirty-six removable Valentine's Day cards. How bad are the jokes? Well, you be the judge: "Where does the Emperor go when he wants to buy something cheap? He looks for a sale at the Maul." There were several relatively cute cards. Like C-3PO's "I want to be the droid you're looking for" and Han Solo in carbonite: "Valentine, don't make me spend the day SOLO."

I have seen those Jeffrey Brown books. They are cute! I have never actually read them, though. :) Lots of time in the Star Wars universe here. Looks like a good time. :)