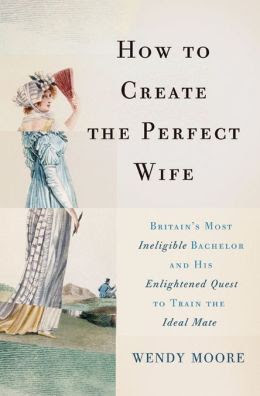 How To Create the Perfect Wife: Britain's Most Ineligible Bachelor And His Enlightened Quest to Train the Ideal Mate. Wendy Moore. Basic Books. 344 pages. [Source: Library]

How To Create the Perfect Wife was a fascinating read, fascinating in a despicable way, I suppose. Most readers will probably not enjoy getting to know the "hero", Thomas Day.

Who was Thomas Day? He was well-known several centuries ago. He lived and wrote during the reign of George III. He wrote two books for children: The History of Sandford and Merton and The History of Little Jack. Writing for children was definitely a new phenomenon. He also co-wrote a best-selling abolitionist poem called "The Dying Negro."

The focus of How To Create The Perfect Wife is not on Thomas Day's writing career. The focus is on the man's eccentricities. Day was a bit OBSESSED with Jean-Jacques Rousseau. It wasn't just that Emile was his most-favorite book. He was determined to live-out the philosophy, to run experiments on human subjects. His love life was a big mess, a complete failure. Why couldn't he find a wife? a good wife? a perfect wife? Society was to blame. He couldn't find an untainted woman free from contamination with the world, with society. He couldn't find a woman who shunned fashion, music, dance, art, good conversation. He wanted a brilliant wife who loved to listen, was willing to listen, obey, and serve. He wanted to be worshiped, and obeyed. Since there wasn't an eligible woman ready and willing to marry him now, the solution was simple. He would look for a young girl, a trainable child, one whom he could raise according to Rousseau's principles and philosophy, one whose training and upbringing he could control almost from start to finish. (I think he picked an eleven year old and a twelve year old?) He picked TWO girls and put them in competition with each other. Though of course neither girl knew they were an experiment, that they were being trained to be one man's notion of the perfect wife. After a year, he chose one girl to continue on...

The focus of the book is just as much on the one girl, Sabrina....

I won't tell you if Day's experiment is a success...and if he ever married....

I enjoyed reading How to Create The Perfect Wife because of the glimpse into the culture and society. I enjoyed meeting Day's friends the best. He kept surprisingly good company: Richard Lovell Edgeworth (father of Maria Edgeworth), Erasmus Darwin, and Anna Seward. Sabrina also became quite close to the Burney family: Charles Burney, Frances Burney, Sarah Burney.

The book discusses Ovid's Metamorphoses and George Bernard Shaw's Pygmalion (1912). The myth was very popular in the 18th century. It inspired many operas and melodramas, including one by Rousseau. Thomas Day's experiment inspired many novelists including Anthony Trollope (Orley Farm), Henry James (Watch and Ward), Maria Edgeworth (Belinda).