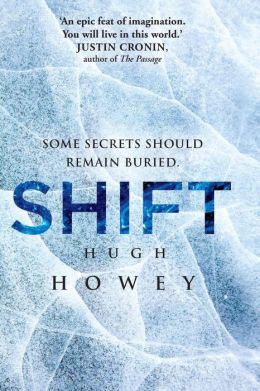 Although Shift is a prequel, Shift should definitely be read after Wool. The novel tells of the creation of the fifty silos, of the politics that led to the end of the world--as they knew it--and to the beginning of a new world--an underground world. This story is told in alternating points of view and alternating time periods.

From before, readers meet Donald an architect who designed the silo and helped make the project happen. He was told that the silos were for just in case. In a way, he was manipulated by others, but, that's another story.

From Silo 1, readers come to know Troy through several of his shifts. In between shifts, Troy is frozen. He and the others in Silo 1 are from before. Those working shifts take pills to help them forget what they want to forget, but, Troy is not like the others. He doesn't want to forget, he wants to remember everything. Even if what he remembers breaks his heart.

Several other silos are visited throughout Shift, usually in connection to failures and rebellions and chaotic times. The last half of Shift, which is perhaps the most haunting narrative portion, tells of a young boy essentially left alone after a failed rebellion. Readers of Wool will recognize him as Solo, but, this is HIS very personal story.

Shift tells a very different story from Wool, but, it is equally compelling. I loved the blending of Shift and Wool towards the end. Reading Shift truly puts a new perspective on Wool. I would definitely recommend both books!

This series sounds a bit different. I will have to add them to my wish list. :)