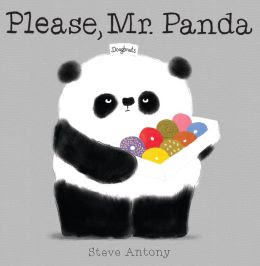 If the book had not been described as a book about manners, I would have been puzzled by Steve Antony's Please, Mr. Panda. In my opinion, it is still a very strange book. My first impression of the story was NOT that the animals were lacking in manners and being rude to Mr. Panda. Far from it. I actually found Mr. Panda to be the rude one since he was ASKING animals, "Would you like a doughnut?" and then abruptly changing his mind and saying NO, YOU CAN'T HAVE ONE AFTER ALL. The description may say that Panda is patient and polite, but, that was not my impression. He came across as bored, disinterested, and disgusted. But apparently, that isn't the proper way to read Please, Mr. Panda. Readers are supposed to believe that it is the animals who say "Yes, I'd like a doughnut" who are being RUDE. At least according to Mr. Panda, no matter what else is said if you fail to include the word "Please" it means YOU are being unforgivably rude and justifies completely his subsequent actions. Perhaps further complicating the situation, I never could distinguish if Mr. Panda was offering free doughnuts he'd made OR if Mr. Panda had a job selling doughnuts. If selling doughnuts was his job, if it was his job to go around asking animals if they'd like a doughnut, he was TERRIBLE at it. Clearly Mr. Panda would be far, far happier at another job where he didn't have to interact with anyone at all. Since clearly he is not what I'd call a "people-person." If none of this was job-related, I'm still confused. Clearly, Mr. Panda hates doughnuts. And he probably hated making them just as much as he hates walking around trying to give them away. The question I have is WHY would he bother? Either way, I think Mr. Panda had a bad attitude and was extra-sensitive to "insults." It wasn't as if the animals were going: Hurry up, I want it NOW, NOW, NOW! Or whining WHY ARE THERE NO SPRINKLES?! I NEED SPRINKLES!!! Or THESE DOUGHNUTS ARE TOO SMALL. The animals didn't come across as demanding or whining or picky or complaining. If the book is teach the importance of saying Please and Thank You always, always, always, then a little exaggeration of the "rudeness" so it was less subtle and actually obvious may have been preferable. I think the animals in the story are just as puzzled as I was. They're probably thinking, WHAT WAS HIS PROBLEM, ANYWAY? Now that I've read the book three or four times, I can see that the ostrich was definitely rude and the whale was very, very tacky. But still am puzzled by the book as a whole.

This one was originally published in the UK. I do like the illustrations well enough. But it was hard to like Mr. Panda.