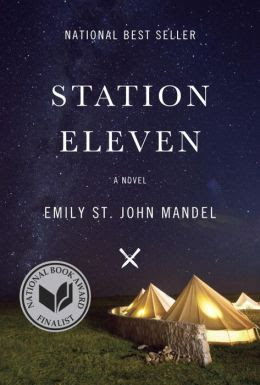 The King stood in a pool of blue light, unmoored. This was act 4 of King Lear, a winter night at the Elgin Theatre in Toronto.

Did I love Station Eleven? Yes. Did I love, love, love it? I'm almost sure of it. Only rereading it a year or so from now will answer that question definitively. But regardless of if it was love or LOVE, Station Eleven is a fascinating, absorbing read. It isn't exactly chronological in its storytelling, yet, I found it easy enough to follow. Its storytelling--the form of it, almost reminds me of LOST. It tells both the story of civilization's collapse and civilization's rebuilding. Readers meet a handful of characters then and now.

The "then" sections perhaps center around the character of Arthur Leander, an actor, a celebrity. Chapters focus in on significant, dramatic moments of his life. Not necessarily in chronological order. And not always from his point of view. Readers meet two of his three ex-wives, his son, his (former) best friend, his lawyer, etc. The novel actually opens with Arthur's death on stage. One young witness to his death is a young girl, Kirsten. Another is a former paparazzi turned paramedic.

As I said, the focus is on the collapse of society and civilization. What life might be like if 98% of the population died from a terrible plague/disease within a few weeks. In this book, it's the "Georgian flu." What would life be like without modern conveniences--gas and fuel, electricity, telephones, television, internet, etc.

I would definitely recommend this one.

I'm on the wait list for this at the library. Now I'm even more excited to read it! Great review!