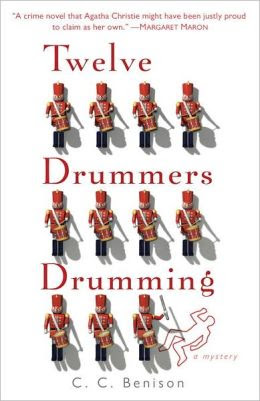 Twelve Drummers Drumming is the first in the Father Christmas mystery series by C.C. Benison. Tom Christmas, the hero, is a vicar in the village of Thornford Regis. He's a widower with a nine year old daughter, Miranda. Both are still healing and adapting. Tom's wife was murdered. So why settle in Thornford? Tom and his daughter were visiting his sister-in-law and her husband about a year before the novel opens. There was a funeral in the village that day, but, the vicar was missing. Tom Christmas (Father Christmas as people can't help calling him!) stepped in and performed the funeral service. When the position became available, Tom wanted the job for keeps. But village or hamlet life isn't all cozy. There are a few mysteries to be solved. And since Inspector Bliss and Inspector Blessing aren't quick to solve cases, Tom's skills come in handy. Tom is good at observing things, and, it helps that people can't seem to help confiding in him and telling their secrets.

So there are two murders to solve in Twelve Drummers Drumming. I won't say a word about the crimes and the clues. I hate having mysteries spoiled! Just as important as the clues, if not MORE important than the clues are the characters. That I can safely comment on! I really enjoyed the depth of the characters!

Overall, I would say that Twelve Drummers Drumming is an entertaining and satisfying read. I enjoyed spending time with the characters. I would recommend it!

I think I enjoyed the second Father Christmas mystery even more than the first. Tom Christmas is the vicar of Thornford Regis. He is also the chaplain to a traditional Scottish pipe band, The Thistle But Mostly Rose South Devon Pipe Band. While Tom's daughter, Miranda, is having a sleepover, and his housekeeper, Madrun, is panicking about a failed yorkshire pudding, Tom Christmas is off--for better or worse--to the Burns Supper. But the weekend is problematic. The horrible weather--the blizzard-like conditions--means that half the band is unable to come, which leaves us with ELEVEN pipers piping. But while half the band is unable to make it through the storm, there is one unexpected guest that shows up at the local hotel where the Burns supper is being held. That guest is Judith Ingley, a retired nurse. Though usually women aren't allowed to attend, they don't turn her away in the storm.

Eleven Pipers Piping IS a murder mystery. So I won't share any details about the crime(s) or victim(s). I will say that the reader gets to spend plenty of time with Father Christmas as he interacts with the whole village before, during, and after the crime. I really enjoyed the setting very much. The characterization didn't disappoint. 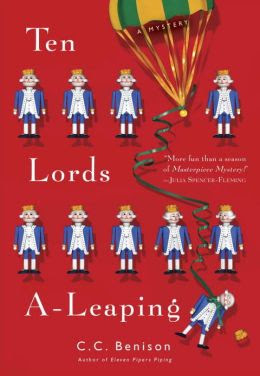 I really found myself hating the first half of the book. The series has never been squeaky clean, previous titles in the series have had a few words now and then that keep it from being perfectly clean. Still, it wasn't enough to keep me from reading, from wanting to read on in the series. But Ten Lords A-Leaping turns smutty. And smut in a creepy, inappropriate way. To the book's credit, Tom ends up feeling disgusted by the end of the novel with his own experience. But still.

Even though I really disliked much of the beginning and middle, I kept reading. And the mystery aspects of the novel began to grow on me a bit. I can't say that I "liked" it better than the first two in the series. I can't even say that I "liked" the majority of the characters. There were plenty of despicable characters. I'd say there were more despicable characters than nice ones. But. That is part of the genre, I suppose.

I enjoyed this one enough by the end, but, honestly I was a bit disappointed with this one.
© 2015 Becky Laney of Becky's Book Reviews
Posted by Becky at 8:00 AM

Thanks for your review of these books. I started Ten Lords A-Leaping right before Christmas and put it down due to the language. I will eventually read it (got it from Library Thing Early Reviewers Program), but not as excited at the prospect. Glad the first 2 books in the series were better.

Those first two sound fun for Christmas reading. I'll see if I can remember them again in December!