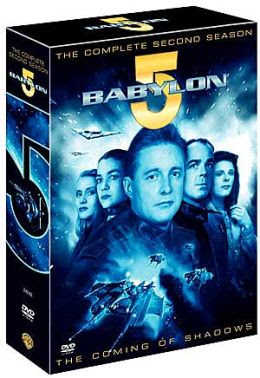 This January, I've enjoyed watching the second season of Babylon 5. I've seen the first eight episodes of season two. If you haven't seen Babylon 5, you might just be surprised by season two. For one thing, Sinclair is no more. (The book To Dream in the City of Sorrows follows Sinclair's adventures if you're curious.) Instead, we have the oh-so-wonderful Captain John Sheridan in command of the Babylon 5 station. That's not the only change either. If you have seen the show, I'd love to hear from you in the comments. Do you like season two better than season one? Do you like John Sheridan more than Sinclair? Or about the same? What do you love best about season two?


The Babylon Project was our last, best hope for peace. A self-contained world five miles long, located in neutral territory. A place of commerce and diplomacy for a quarter of a million humans and aliens. A shining beacon in space, all alone in the night. It was the dawn of the Third Age of Mankind… the year the Great War came upon us all. This is the story of the last of the Babylon stations. The year is 2259. The name of the place is Babylon 5.


Sheridan: What's our status?
Ivanova: The Chief of Security is in critical condition in MedLab. He thinks there's a conspiracy concerning the President's death. Ambassador G'Kar has mysteriously vanished, after two years we still don't know what Ambassador Kosh looks like inside his encounter suit, and Ambassador Delenn is in a cocoon.
Sheridan: A cocoon? As in, a moth or a butterfly.
Ivanova: Yes sir. [Holds one hand at chin height] 'Bout yea high.
Sheridan: Interesting place you have here.

Revelations
And now we have answers! This is a great episode for so many reasons. Delenn emerges, for one thing!!! And I absolutely LOVE John's reaction to seeing her or meeting her for the first time. This one also has some Londo and G'Kar drama. Viewers also learn more of John's past: how he lost his wife Anna several years ago.
Quotes:


G'Kar: "I searched for days, going from one system to another. Then, on dark deserted worlds, where there should be no life, where no living thing has walked in over a thousand years, something is moving, gathering its forces, quietly, quietly... hoping to go unnoticed. We must warn the others, Na'toth. After a thousand years, the darkness has come again."

[Londo rants before the Babylon 5 Advisory Council about the missing G'Kar and Delenn.]Londo Mollari: There, you see! One deserts his post without any explanation, the other one picks the most breathtakingly inconvenient moment possible to explore new career options, like becoming a butterfly!

The Geometry of Shadows
This is a fun episode. Plenty of Londo and Vir. Introduction of Lord Refa (boo, hiss, I look forward to this) Some funny Susan stuff too. This is the episode where the technomages come and go.
Quotes:

Elric: Oh, I'm afraid you have to spend the rest of your life paying for your mistakes. Not this one of course, it's trivial, I have withdrawn the spell, but there will be others.
Londo Mollari: What are you talking about?
Elric: You are touched by darkness, Ambassador. I see it as a blemish that will grow with time. I could warn you of course, but you would not listen. I could kill you, but someone would take your place. So I do the only thing I can–I go. [starts to turn away, then turns back to Londo] Oh, I believe it was an endorsement you wanted. A word or two, a picture, to send to the folks back home, confirming that you have a destiny before you.
Londo: Yes, it was just a thought, nothing more.
Elric: Well, take this for what little it will profit you. As I look at you, Ambassador Mollari, I see a great hand reaching out of the stars. The hand is your hand. And I hear sounds–the sounds of billions of people calling your name.
Londo: My followers?
Elric: Your victims.

A Distant Star
Probably the weakest episode of the season so far. But. I like certain things about it all the same. Susan, Garibaldi, and Sheridan are all put on "food plans" by the doctor. And Sheridan gets a chance to visit with an old friend. There is plenty of action in this one, and shadows/shadow vessels make an appearance.
Quotes:


Delenn: "The universe puts us in places where we can learn. They're never easy places, but they are right. Where every we are is the right place and the right time. The Pain that sometimes comes, it is part of the process of constantly being born."

The Long Dark
Not a favorite episode of mine, but, I do like Garibaldi in this one. I like how he treats Amis. This is the episode where they find a cryonic exploration vessel. One of the humans aboard is brought back to life. And Dr. Franklin gets to flirt. More shadow-y foreshadowing.
Quotes:


Amis: Well, I've found that life is, in general, much easier if I forget most of the things that happen to me.
Garibaldi: You were about to accuse the Centauri ambassador of being in league with the devil…which may not be far from the truth.

Spider in the Web
Mars stuff. Talia stuff. Not a good episode for me.
Quotes:


Sheridan: There is a spider in the web, Mr. Garibaldi. And I intend to find it and kill it.

Soul Mates
One of the best episodes of the season. Londo's three wives come to the station. He's got news. He's been given permission to divorce two of them. He has to keep one, he's told by the emperor. Which wife will he choose? Or will he live long enough to decide? Yes, his life is in danger... Also in this episode, Susan and Delenn do some bonding. Delenn is having a little trouble. Viewers also meet Talia's ex-husband.
Quotes:


Lady Timov: "The secret of our marriage's success, Londo, is our lack of communication. You have jeopardized that success and I would know why!

Lady Daggair: "Timov, Timov. Why do you always draw me into your little verbal fencing matches?"
Lady Timov: "Because I don't have a real sword handy."

Londo: They're merely expressing their feelings for me.
Timov: I can do that. [She slaps Londo on the face…hard]
Londo: You haven't changed.
Timov: You have. You've devolved!

A Race Through Dark Places
A Bester episode!!! And this is the episode where Delenn asks John out so she can experience more of what it's like to be human. John also gets the opportunity to torture Susan with some bad jokes. (Love their brother/sister type relationship).
Quotes:


Delenn: "The woman, who sold me this [dress], told me that I would definitely turn heads"
Sheridan: "Yeah, well, if they turn much farther, you would be sued for whiplash!