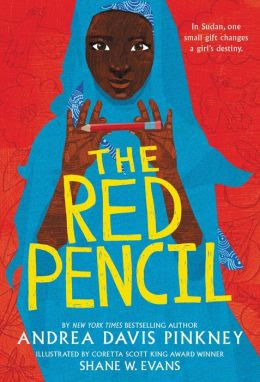 I found The Red Pencil to be a mostly fascinating read, even if it was written in verse. (Do remember that I've said many times that verse novels aren't exactly the best match for me personally). In fact, I found the verse to be strong: that is very well-written. The book itself, though perhaps a tiny bit slow in the first dozen pages or so, was emotional and compelling and hard to put down. The strength of the poetry actually helped me connect with Amira, the twelve-year-old narrator of The Red Pencil. What I didn't enjoy quite as much, perhaps, are the illustrations. Part of me knows that to the character, Amira, drawing is essential. She expresses herself through drawing: she draws with a stick in the sand/on the ground. Throughout the book, this is just an important part of who she is, how she sees her world, how she copes. So I could see why the book is illustrated. But even so, I personally didn't "love" the illustrations.

So. What you should know. The Red Pencil is set in South Darfur, Africa, in 2003/2004. Readers meet Amira, her mom and dad, her sister (Leila), her best friend, her neighbors. (Particularly Old Anwar and Gamal.) One gets a sense of place and community. Readers come to know that what Amira wants, really wants, is an education. To learn to read. To learn to write. Readers also know that her mom is very opposed to the idea. (Her father is not opposed.)

Life does not stay the same for Amira and her family. Upheaval is coming. Her life will be disrupted. Things will be forever changed with the war--the unrest--the coming of the Janjaweed. Soon Amira finds herself a refugee living in a refugee camp....

The Red Pencil is a book to be experienced. I found it to be well-written. Is it as informative and as thorough as a nonfiction book would be on the subject? Probably not. The book focuses on an emotional connection, which I believe is just as important. It gives one a reason to care, a reason to look for more information, seek out more stories.

I have had a bit of good luck with books like this written in verse. This may be a good match for me. Thanks for sharing so much!

Such an interesting piece! Thanks for the review :)

It does look like an interesting book. Sorry you didn't love the illustrations.