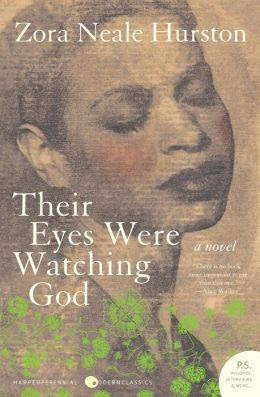 
Ships at a distance have every man’s wish on board. For some they come in with the tide. For others they sail forever on the horizon, never out of sight, never landing until the Watcher turns his eyes away in resignation, his dreams mocked to death by Time. That is the life of men.
Now women forget all those things they don’t want to remember, and remember everything they don’t want to forget. The dream is the truth. Then they act and do things accordingly. (1)

I've read Their Eyes Were Watching God a handful of times now. (I first read it in college.) This book by Zora Neale Hurston is just beautiful and compelling. Every time I reread it I'm reminded just how beautiful and how compelling. I never quite forget, mind you. But every time I pick the book up, I'm swept into the story and experience it all over again. (The best kind of book to reread!)

Janie is the heroine of Their Eyes Were Watching God. There is a framework to the story that allows the reader to come full circle with Janie. Readers first see Janie through an outsider perspective, a gossiping group.


So the beginning of this was a woman and she had come back from burying the dead... The people all saw her come because it was sundown. The sun was gone, but he had left his footprints in the sky. It was the time for sitting on porches beside the road. It was time to hear things and talk. These sitters had been tongueless, earless, eyeless conveniences all day long. Mules and other brutes had occupied their skins. But now, the sun and the bossman were gone, so the skins felt powerful and human. They became lords of sounds and lesser things. They passed nations through their mouths. They sat in judgment. (1)

One from the group is Janie's best friend, Pheoby, she leaves the group after a few pages, and goes to her friend bringing a much welcomed plate of food. Then, together, they talk. Janie tells her friend her story--her whole story--framing things just so, explaining and justifying as need arises. It's honest and emotional.


Janie saw her life like a great tree in leaf with the things suffered, things enjoyed, things done and undone. Dawn and doom was in the branches. (8)

To keep it short: Janie was raised by her grandmother; when she came of age (16 or so), her grandma arranged a marriage for Janie to an older man; when that marriage failed to bloom in love and happiness, Janie is swept off her feet by a traveler passing by; she leaves her first husband and is married to a second; the two settle in Florida and are influential founders of the black community; after the third husband dies, Janie finally, finally, finally falls in love, but, is Tea Cake the love of her life perfectly perfect?! Of course not! Pheoby knew her when she was married to the second husband, when she was Janie Stark. Now, she's come back to that community without Tea Cake, and everyone wants to know EVERYTHING that has happened in the past two years.

Oh to be a pear tree--any tree in bloom! With kissing bees singing of the beginning of the world! She was sixteen. She had glossy leaves and bursting buds and she wanted to struggle with life but it seemed to elude her. Where were the singing bees for her? Nothing on the place nor in her grandma's house answered her. She searched as much of the world as she could from the top of the front steps and then went on down to the front gate and leaned over to gaze up and down the road. Looking, waiting, breathing short with impatience. Waiting for the world to be made. (11)

Janie's first dream was dead, so she became a woman. (25)

Her old thoughts were going to come in handy now, but new words would have to be made and said to fit them. (32)

It must have been the way Joe spoke out without giving her a chance to say anything one way or another that took the bloom off of things. (43)

Every morning the world flung itself over and exposed the twon to the sun. (51)

Janie stood where he left her for unmeasured time and thought. She stood there until something fell off the shelf inside her. Then she went inside there to see what it was. It was her image of Jody tumbled down and shattered. But looking at it she saw that it never was the flesh and blood figure of her dreams. Just something she had grabbed up to drape her dreams over. In a way she turned her back upon the image where it lay and looked further. She had no more blossomy openings dusting pollen over her man, neither any glistening young fruit where the petals used to be. She found that she had a host of thoughts she had never expressed to him, and numerous emotions she had never let Jody know about. Things packed up and put away in parts of her heart where he could never fidn them. She was saving up feelings for some man she had never seen. She had an inside and an outside now and suddenly she knew how not to mix them. (72)

All next day in the house and store she thought resisting thoughts about Tea Cake. She even ridiculed him in her mind and was a little ashamed of the association. But every hour or two the battle had to be fought all over again. She couldn't make him look just like any other man to her. He looked like the love thoughts of women. He could be a bee to a blossom--a pear tree blossom in the spring. He seemed to be crushing scent out of the world with his footsteps. Crushing aromatic herbs with every step he took. Spices hung about him. He was a glance from God. (106)

The wind came back with triple fury, and put out the light for the last time. They sat in company with the other in other shanties, their eyes straining against crude walls and their souls asking if He meant to measure their puny might against His. They seemed to be staring at the dark, but their eyes were watching God. (160)

Have you read Their Eyes Were Watching God? What did you think?

Someday I hope to read this book. Your review of it makes it sound so beautiful!