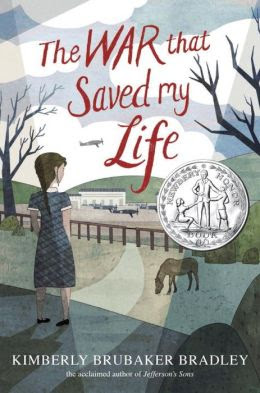 "Ada! Get back from that window!" Mam's voice, shouting. Mam's arm, grabbing mine, yanking me so I toppled off my chair and fell hard to the floor.

It should come as no surprise that I loved, loved, loved Kimberly Brubaker Bradley's The War That Saved My Life. It's my kind of book. It's set in Britain during World War II. (To be honest, it could be set practically anywhere during World War II, and I'd want to read it.) It reminded me of Good Night, Mr. Tom which is a very good thing since I loved that one so very much!

Ada's existence before the war was bleak. Because of her club foot, Ada is verbally and psychically abused by her mother. She's restricted to staying in the family's one room apartment, and she's discouraged from even looking out the window. She hasn't been outside ever as far as she knows--can remember. Her younger brother, Jamie, may not be as abused as his older sister. But neglected and malnourished? Definitely. He at least gets to leave the house to go to school, even if he isn't leaving the house clean.

When London's children begin to be evacuated days before war is declared, their mother agrees to send Jamie off to the country. She has no plans of sending Ada, however, telling her that no one in the world would want her--would put up with her. Ada, who has secretly been teaching herself to stand and even to walk, sneaks away with her younger brother. The two of them need to be together.

Susan reluctantly takes the two children into her home. It's not anything against Jamie and Ada, she says, it's just that she doesn't feel adequate enough to take care of anyone else. If truth be told, she sometimes struggles to take care of herself. Since Becky died, she's been isolating herself, often depressed. But Susan finds herself caring for these two children very much. Could it be she's found her family at last?

Ada and Jamie are difficult, no question. Ada is not used to being treated decently let alone kindly. She doesn't know how to respond and react to love and tenderness and respect. And the fact that Ada knows that it's temporary isn't helping. But Ada will slowly but surely be transformed by the war. One thing that helps Ada tremendously is Butter, a pony. (Butter belonged to Becky, a woman readers never actually meet, but, Susan talks about her often with much love and affection.) Ada teaches herself to ride, and her confidence increases almost daily.

Ada, Jamie, and Susan are all well-developed characters. I cared about all of them. Readers also meet plenty of other villagers. The story has plenty of drama!

This sounds good. I'm always fascinated by the stories of children sent out to the countryside for the duration of the war.

Thanks for participating in British Isles Friday!

Lovely review. I can't wait to read this!

I just read this book and LOVED it. Definitely an interesting perspective on England in WWII.