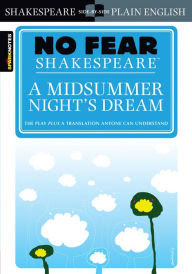 A Midsummer Night's Dream by William Shakespeare is one of those dependably enjoyable rereads. True, I don't love, love, love it as I love Much Ado About Nothing. I don't think any of the couples within are giddy-making and perfectly suited to one another. But the play is fun in its own way, in part because all the fairy action: Oberon, Titania, and Puck (Robin Goodfellow).

The play opens with a countdown of sorts towards the marriage between Theseus and Hippolyta. Egeus, the father of Hermia, goes to Theseus with his dilemma. His daughter, Hermia, is in love with Lysander and wants to marry him. Egeus wants his daughter to instead marry Demetrius. Helena, Hermia's close friend, is truly, madly, deeply in love with Demetrius. Who does Demetrius love? Well, it depends on the day, I suppose. Though perhaps that's not fair. When the play opens, he is hoping to marry Hermia.

Hermia is given an ultimatum: marry Demetrius OR else join a nunnery OR die. The lovers come up with a fourth option--an unapproved option--run away together and not get caught. For better or worse, Hermia tells Helena her plan. For whatever reason, Helena decides to betray her friend's trust and tell Demetrius. All four end up together in the woods--or forest--in a roundabout chasing that lasts most of the night.

Viewing all this 'madness' of sorts are a handful of fairies. Oberon, who is out of sorts with his wife Titania, truly pities Helena and wants her to get a happily ever after ending. So he tells Puck to use a love potion (something from a special flower) on the eyes of the young man. Perhaps not realizing that there are two young men from Athens in the woods, Puck makes a mistake and doses Lysander instead. Lysander switches his devotion just like that to Helena. Oberon does eventually have Puck correct this mistake. Demetrius declares his passion and love for Helena by the time the night is over...and Lysander's love for Helena vanishes just as quickly as it appeared...though not before Hermia and Helena get into a fight.

But there's more. Several men from the village--amateurs for sure--are rehearsing a play to perform for the marriage/wedding celebration of Theseus and Hippolyta. They are absolutely, over-the-top ridiculous. And Nick Bottom is more ridiculous than all the others combined. Puck uses Nick Bottom horribly in a way. But all will be well...

This play is fun and silly.

This the production for this year's Shakespeare in the Park in St. Louis -- it seems perfectly suited for the venue. I think I'll go! And, I definitely want to read it first -- that always helps me with Shakespeare.