My Thoughts on Two Dickens Adaptations 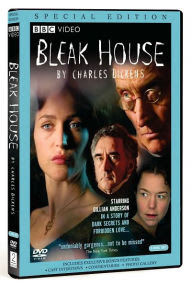 I was happy for an excuse to rewatch Bleak House. This adaptation saved me from abandoning the novel when I initially tried to read it six years ago.

What you should know:

It is fifteen episodes long. The first episode is about an hour long. The remaining fourteen episodes are thirty minutes each. Oddly enough, the fact that when you're binge-watching (and who doesn't binge-watch Dickens???) your progress is interrupted by opening and closing credits so often makes the drama feel much, much longer than it actually is.

There's some humor, some mystery, a LOT of drama, and a bit of romance.

The romance I found almost-but-not-quite satisfying the first time I watched it. I really loved John Jarndyce--perhaps carrying over from the book where he plays an even bigger role in some ways. In the book, the doctor isn't even NAMED for his first few appearances. He's just "a doctor" or "the doctor." The romance between Esther and Dr. Woodcourt--in the book--was practically nonexistent. In the movie, especially the second time around, the romance is there even if a tiny bit subtle. It helped me that Richard Harrington has become more familiar face to me. (Bleak House, Lark Rise to Candleford, Poldark). There is something about him--perhaps his eyes--that are just mesmerizing. I wouldn't mind him cast as Mr. Rochester if another Jane Eyre is made. 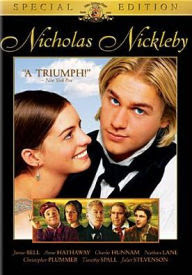 This is a 'relatively' short adaptation of a Dickens' novel. Considering how long the novel is to begin with, the fact that one can watch it in just a little over two hours seems a bit questionable. Yet I found it enjoyable. I had no other adaptation to consider it by, that's true. But I think it's one of those adaptations where you don't really need prior familiarity with the book to make sense of it.

It stars Christopher Plummer as Ralph Nickleby. (Christopher Plummer was probably my first BIG, BIG crush. There were plenty of reasons I watched Sound of Music every single day for months.) Charlie Hunnam is Nicholas Nickleby and Romola Garai is Kate Nickleby. (She also stars in Emma and Amazing Grace).

Did I love, love, love this one? Probably not. I don't know that we really get to know any of the characters fully. But it's an enjoyable movie to watch at least once.