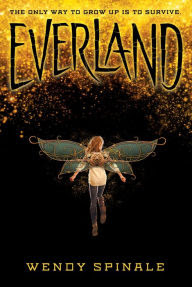 Everland is a dystopian, steam-punk retelling of Peter Pan.

If I was giving stars for premise, it would be five stars for sure. The premise is surely the most interesting and captivating thing about Everland. Gwen Darling is the heroine. Since a virus/plague killed off most--if not all--of the adults in England, Gwen is responsible for her younger siblings, Mikey, the youngest, and her sister Joanna. When Gwen is out scavenging one day, Joanna is kidnapped by the Marauders, the Marauders are led by Captain Hook, though Hook is just a nickname. His initials are H.O.O.K. Fortunately for Gwen, on the same scavenging trip, she caught her first glimpse of Pete and Bella. These two come to her rescue. Pete eagerly and generously. Bella with much protest and grumbling. Pete hopes that Gwen is truly IMMUNE, the one human on earth who is immune to the virus, the one whose blood or antibodies in the blood may hold the cure for saving those left alive. Pete takes Gwen and Mikey to the underworld--the underground remains of Everland, or London. She'll join the Lost Boys. Bella is the only other girl. Jack and Doc are two Lost Boys that seem to stand out from the rest.

So, as I mentioned earlier, the premise gets five stars from me. Unfortunately, I found the world-building, the storytelling (narration, plotting), and the characterization to all be lacking.

The world-building seemed all-surface and not much depth. Like flimsy props on a set that could potentially be tipped over leading to disaster. I never once forgot myself in the story or got lost in the story. And that's what you want in fantasy: to be swept into a whole new world, to become absorbed in it, fascinated even. It isn't that the world created doesn't have potential or promise. It does. But I don't want potential-fulfillment, I want actual fulfillment. One thing that bothered me was the depiction of this "war" between England and Germany. The German bad guys--led by the oh-so-evil Queen that we never once meet--didn't come across to me as well-executed.

The narration was an almost for me as well. I really did not enjoy the alternating narrators. Chapters alternate perspectives between Gwen and Hook. If I had to have alternating characters, I'd much rather have gotten to know Bella or Pete or if it absolutely had to be a bad guy, Smeeth. Seeing Captain Hook through Smeeth's eyes would have likely been more entertaining than being stuck in Hook's head. Still, I think readers didn't get to know Bella enough, and, it would have been great to have alternating chapters between Gwen and Bella. It would have made for a lively, tension-filled read. Because Bella seemed fierce, strong, stubborn.

The plot itself was okay, but, it was the little things that annoyed me. For example, the "need" to represent pixie dust leading to the gold dust powder that somehow, someway enables all the characters to see in the dark. That's just one example of how the need to represent as many details as possible from Peter Pan led to a weaker story. That being said, the surprise introduction of Lily was very much necessary. Now that I think about it, LILY would have made a good alternate narrator. What I was not thrilled with was the "instant" romance between Pete and Gwen.

The characterization. I personally found it on the weak side. If the premise wasn't so strong, would anyone really keep reading? Or, would I have kept reading?! (That would be the fairer question). Gwen, Pete, Bella, Hook, all the characters really felt like paper dolls. Some readers prefer action-driven novels. Some readers prefer character-driven novels. I happen to prefer character-driven novels. And I like my action novels to have a certain depth to their characters. I think the best villains should be fleshed-out villains. Even though we were in Captain Hook's head, I never once really thought of him as being a developed character.

Think of LOST. Tons of characters, plenty of action and drama, plenty of tension and suspense, plenty of mystery. Yet what hooks me is the DEPTH of the characterization. Every single character is fully fleshed out--past, present, everything in between. You may or may not "like" a character. But every action, every word seems to come from within a character, staying true to that character. The same could be said of Once Upon A Time. And that show put a WHOLE new spin and then some on Peter Pan and Captain Hook!!!!

Would a rereading at some point persuade me to reevaluate this one, and "like" it more??? Perhaps. After all, such has occurred before. But I'm not eager to do so now.

The premise of this does sound really good. That is too bad you didn't like it more!

Definitely a fun premise. Too bad it didn't work better in the implementation.