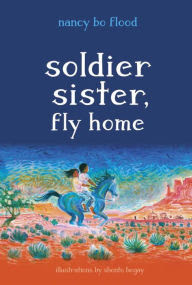 Did I enjoy reading Soldier Sister, Fly Home by Nancy Bo Flood? Yes, mostly. But not completely. I can see how there are certain scenes in this one that would greatly upset readers.

I'll start with what I did love. I loved the main character, Tess. She's a complex character, and this is her coming-of-age story. She's struggling to answer the "Who am I?" question. She's half Navajo, half-white; she doesn't feel comfortable anywhere. (When she's attending a mostly-white school, she feels out of place, she feels like she has been labeled as "Indian" as "other." And when she's at home on the reservation, she again feels out of place, like she isn't "Indian" enough.)

But she isn't completely clueless. Here are a few truths she knows to be true: 1) she LOVES to run. 2) she LOVES her family. 3) She doesn't understand how her older sister, Gaby, could join the army and go fight a war in Iraq. 4) She misses her sister terribly, and worries that something horrible might happen to her sister. She doesn't want to pretend that she's proud of her sister and happy to have a warrior sister. 5) She is scared of horses, particularly her sister's stallion, Blue. But scared as Tess is, she promised her sister, Gaby, that she'd take care of Blue while she was away.

The novel opens with the community coming together to mourn or memorialize a fallen soldier--the first Native American woman to die in combat: Lori Piestewa. Soon afterwards, her sister comes home supposedly for a two week leave. Tess is thrilled; she's got plans to spend as much time as possible with her sister. But that isn't to be: her sister will be leaving for Iraq in just a day or two.

In addition to focusing on the relationship between sisters, this one also focuses on Tess' relationship with her grandparents--particularly her grandmother. This relationship was lovely to see developed.

What didn't I love? There were a few scenes that were rough if you're an animal lover. For example, one scene has Tess slaughtering in great, graphic detail a sheep. It is a scene that comes at the end of a very emotional climax. And perhaps it is supposed to be scene as celebratory and significant. But to me, it was way too much. I won't mention the second scene because that would spoil the novel, something I wouldn't want to do.

Is it "fast" or "slow"? I don't know that it's fair to phrase it just like that. I know that some readers are ALL about the action: fast-paced, action-packed, adventure-filled DRAMA. But I know that other readers--myself included--focus more on characters: character development, exploring relationships between characters through dialogue, building authentic, believable settings, etc. I'd say that Soldier Sister, Fly Home is character-driven with a handful of intense scenes.
© 2016 Becky Laney of Becky's Book Reviews
Posted by Becky at 11:00 AM