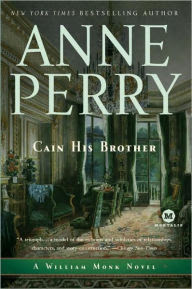 I found Cain His Brother a bit of a disappointment after The Sins of the Wolf. Especially in the beginning. Readers be warned, you may spend a lot of time YELLING at William Monk. Especially in the first half of this one. William Monk has been somewhat sympathetic even if flawed in earlier books, but, in this one, well, the way he speaks to Hester is just ALL KINDS OF WRONG. I think it stood out more in this one because of how Sins of the Wolf ended. And it wasn't just that. Also he seems to be completely stupid and gullible sometimes where women are concerned. When Druscilla's character was introduced, for example, I started shouting warnings to Monk. He didn't listen. No matter how many times I tried to warn him. I ended up liking this story after all, but, only because Hester COMPLETELY redeems the situation and saves the day. Does he know it?! Of course not. And if he did, he'd probably just yell at Hester and dig a deeper hole for himself as far as I'm concerned. But still I enjoyed this one overall for how Hester, Monk, and Rathbone work together for justice. And the case they're working on is INTERESTING.

Angus Stonefield has been murdered--presumably--by his "evil" twin brother, Caleb Stone. There is no body, just bloody clothes and a missing person case. Some might argue, well, he tired of his wife, he decided to abandon his family, his job, and begin a new life somewhere else. And his clothes might have anyone's blood on them. The widow, Mrs. Stonefield, comes to William Monk desperate. She needs him to find enough proof that he can be declared dead. Sure she'd love justice, but, is realistic about the situation.

Hester and Lady Callandra, meanwhile, are busy nursing typhoid patients on the wrong side of town. The book is very much focused on poverty and the horrible living conditions in 1850s London.

There is plenty of detecting in this one, and, I think this one probably has the biggest twist so far in the series.

Ha! I love that you shout at the characters in books. They really should listen!