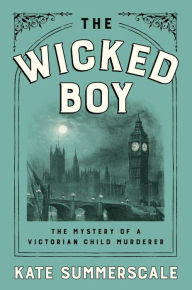 Because I was expecting to love, love, love it, I find myself a bit disappointed in Kate Summerscale's latest book. I think if I'd had reasonable expectations of it, it would have proved much more satisfying to me!

I did enjoy reading her newest book. I love reading nonfiction about Victorian England. And this is a true-crime book, which should prove appealing enough to readers.

Who is the "Wicked" Boy and was he really, truly wicked?! The subject of this one is Robert Coombes. He was convicted of murdering his mother, Emily Coombes. He didn't exactly try to cover it up. He left her dead body on the bed, exactly where he stabbed her. He left the bloody knife on the bed as well. He merely locked the door to his mother's room, told his brother he'd killed their mother, and both boys went about their business. Not just for a day or two--but for a week or two. When the smell brought persistent visitors--his mother's friends--and the police to the house, he confessed openly that he did it. He was a boy, and, perhaps not quite sane.

In any case, readers learn about his life before and after the murder; the trial, his time in prison/asylum, his release, his eventual immigration to Australia, his time as a soldier in World War I, etc. Everything is placed into context. The book has dozens of little history lessons in it, little asides that take you off the path, if you will, but ultimately lead you back on it again.

The last section of the book goes behind the scenes in the writing and researching of the book. This section helped me appreciate the book more and make sense of the rambling. In other words, knowing the author's purpose and how she saw things helped me to like the book more.

The trial took place in the mid 1890s. He was released from the prison/asylum a few years before World War I started. He moved to Australia before the war started as well. He joined up as soon as England declared war. He was a musician in his regiment's band. There were lots of little details and asides that add depth to this one. But. It isn't a particularly quick and absorbing read.

Darn. I love all of her books, so guess I need to wait on this one so my expectations are not too high!

I don't seem to get the true-crime genre. There seem to be conventions that require such a huge number of details that my brain can't hold it all.