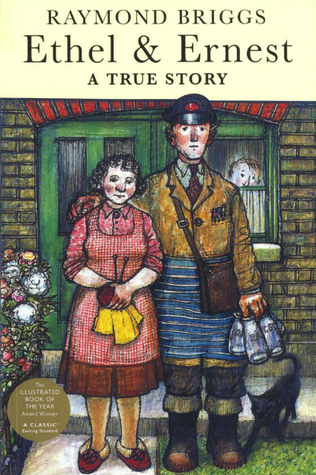 First sentence: Monday 1928. Tuesday. Wednesday. Ethel! For heaven's sake! Where ARE you? Coming Madam. Thursday. ETHEL! Friday. Saturday. How about coming to the pictures with me?

My thoughts: I recently watched the film adaptation of Ethel and Ernest. It was LOVELY, absolutely lovely. The film was intense and sweet. I don't mean just intensely sweet. It was dramatic but not melodramatic--at least not most of the time. When it ventured there--it was for humor. The book is essentially the same as the film. The film kept to the novel almost word for word most of the time with a few teeny-tiny changes here and there.

One of the melodramatic moments is when Ethel is having a hysterical fit after having her son's hair cut for the first time. It is something that doesn't become FUNNY funny until later in the film--the book. She's broken down when he's a toddler when he's given a short haircut, his curls are GONE. As he grow up--particularly as a teen boy and a young adult, she breaks down multiple times because of his long hair. She wants him to get a hair cut; she wants to see him with short, neat hair. She's always, always, always pushing a comb at him.

Providing drama for two sections of the novel at least are European tensions, the threat of war, and WAR itself. Ethel isn't one for paying attention to world politics UNTIL it invades her home. When the call to evacuate the children of London comes--it hits her hard. It hits both of them hard. One mustn't think that because Ernest doesn't cry--blubber like Ethel, if you will--that he doesn't feel things. Raymond goes off to the country. And the two are left behind with their world literally exploding around them.

The book doesn't just celebrate the BIG moments of life, but the little, everyday ordinary moments of life. The moments that you hardly think worth noting, worth appreciating. It is also great at capturing the little gestures of life. The little things Ernest does for Ethel and Ethel does for Ernest. The little things that glue this couple together in good times and bad. I think it is realistic in that aspect. Neither Ethel or Ernest are perfectly-perfect saints without any quirks or flaws. Ethel is Ethel; Ernest is Ernest; they grow together.

Though it's written by the son, I think he truly tries to keep the point of view of his parents.

The ending--particularly in the film watching it the first time--is crushing emotionally. Not because it's about manipulation but because it's honest and raw.

I think it would be fitting to end with the lyrics of Is It Already Time? I am familiar with the George Strait version. It was written by Aaron Gayle Barker.