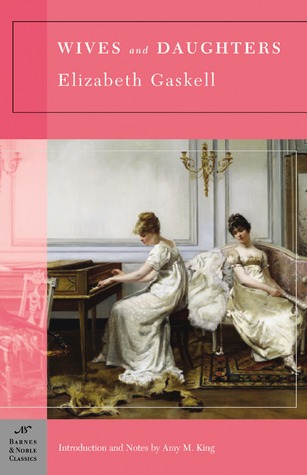 First sentence: To begin with the old rigmarole of childhood.

Premise/plot: Molly Gibson is a doctor's daughter. Many view her as just a simple, ordinary village girl--nothing extraordinary about her. But to those that see Molly's worth--really see it--she is anything but ordinary.

Molly's world has a way of being turned upside down and shaken about.

Her mother died when she was a child. Her father has done a good job raising her by himself, but, he is a man, a doctor, with just one way of seeing the world. When her father is confronted by reality--his daughter is growing UP and the opposite sex may just start noticing her as a woman--he panics. He packs up his daughter and sends her to a neighbor's house.

Squire Hamley and his wife are happy to take her in--temporarily at least. They have two sons, but no living daughter. Osbourne and Roger are away at school. The squire doesn't want either son to fall in love with a mere doctor's daughter. But his wife takes to Molly like she's her own flesh and blood. She loves her sons--no doubt--but Molly is a faithful friend and companion, an excellent listener.

While his daughter is being looked after elsewhere, HE meanwhile is courting a woman and contemplating a second marriage. Hyacinth Clare was a governess for a local family. (The family divides its time between the countryside estate and the city.) She married and had a daughter, Cynthia. After her husband's death, she opened up a (pitiful) school. Her daughter has only ever been a burden to her. She is looking for someone--anyone--to "save" her. This marriage doesn't touch her heart, not really. But Mr. Gibson is fooled enough--at least at the start.

After the two marry, the families try to blend together. Mr. Gibson will have to adapt to living with a new wife and a step-daughter. Cynthia and Molly are as different as night and day. Molly and Cynthia love one another--but not because they are peas in a pod. Molly knows that Cynthia is a different creature altogether. Cynthia recognizes that Molly is truly good, the real deal; there is no hypocrisy or phoniness to her. Cynthia recognizes her own nature. She is not "good." She is morally weak. She spends most of her time putting on a front. She doubts if she's capable of being sincere, honest, constant. She blames this on her father's death and her mother's lack of attention. Her mother is selfish, self-centered, self-absorbed, incapable of feeling affection or concern, vain, manipulative.

Molly will have to adapt to living with Cynthia and her step-mother. Living with Cynthia--loving Cynthia--doesn't fill like work, like a full-time job. But Molly cannot see eye to eye with her new mother. At all. There is something tedious or draining about having to get along with her. And Molly is determined to live in peace with her new stepmother--to not add to her father's worries with fights and fusses. Now peace in the household does not depend on Molly. Even if Molly and Cynthia were out of the house altogether that would not guarantee that Mr. and Mrs. Gibson would get along peacefully and smoothly.

Men in the neighborhood notice Cynthia's arrival, of course, and soon there are would-be suitors paying call to the Gibson household. Will Molly find love too?

My thoughts: I first read Wives and Daughters in 2008. I enjoyed it then. I did. It was my first novel by Elizabeth Gaskell. But I loved it even more the second time. I appreciated it more. I noticed more. I've also read more Victorian literature since the first time.

I didn't remember all the details of the novel. I kept expecting Cynthia to have committed a Hardy-esque or Eliot-esque sin. I kept expecting it to come out that Cynthia had had a child with Mr. Preston. (It didn't come out because it didn't happen.) I also kept suspecting that perhaps Miss Clare (aka Mrs. Gibson) perhaps had an entanglement herself with Mr. Preston in the past. I may have a vivid imagination.

I shared quotes from the first half of the novel here.

The following time I read a blog, I hope that it doesnt disappoint me as a lot as this one. I mean, I know it was my choice to read, but I really thought youd have something fascinating to say. All I hear is a bunch of whining about one thing that you could possibly fix should you werent too busy looking for attention. online casino real money

I haven't read this one, but I loved North and South! I should get to this some day.