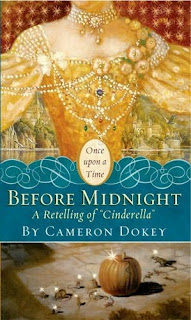 Dokey, Cameron. 2007. Once Upon A Time: Before Midnight: A Retelling of Cinderella.

First paragraph: What do you know about yourself? What are your stories? The ones you tell yourself, and the ones told by others. All of us begin somewhere. Though I suppose the truth is that we begin more than once; we begin many times. Over and over, we start our own tales, compose our own stories, whether our lives are short or long. Until at last all our beginnings come down to just one end, and the tale of who we are is done.

This is the story of Constanze, though even in her own story she is better known as Cendrillon, Child of cinders. Her mother, a beautiful woman, dies in childbirth. Her father sick with grief--anger, bitterness, regret, fear--rejects her. She is raised by her godmother, Old Mathilde. Her childhood companion is a boy named Raoul. Her father returned with him when Cendrillon was just two weeks old. The father does not live with them or acknowledge them. They're in the country, almost completely forgotten. But as you might have guessed, they don't stay forgotten.

It all starts with a wish on her fifteenth birthday. (I believe it is her fifteenth. Anyway, it's a birthday.) She wishes for love; she wishes for family. Her bold wish is that her father will remarry. She wants a mother to love and love her in return. She also wishes for two stepsisters. Two because that way at least one might love her in return. A few weeks (or maybe several months) later her wish comes knocking on the door. Surprise. The stepmother and her two stepsisters are there with no clue who Cendrillon is. Her father, of course, never mentioned her.

This isn't a marriage of love. Nor is it one of convenience. It is an arranged marriage. When the king orders Chantal (the stepmother) to marry Etienne de Brabant (the father), how can either one refuse? An order is an order. The father is rumored to be the Queen's man. The stepmother is rumored to be the King's. (The king and queen hate each other. Hate. And both are looking to control the other. So the kingdom has two sides--those that support the Queen's dominance, and those that support the King's rule.)

The stepmother and her two children are just as cast off as Cendrillon herself. Not wanted. Sent to the country to live forgotten forever.

This uneasy existence might have continued on year after year except for one little thing:

The Prince is giving a ball.

Every eligible maiden must attend.

This story of Cendrillon is perhaps more complex than you're expecting.

© Becky Laney of Becky's Book Reviews
Posted by Becky at 11:05 AM

I know this is no way to judge a book, but that is a gorgeous freaking cover!

That's what I was going to say! I was sold before I read anything on the cover alone.

I agree, motherreader, great cover! This does sound like an interesting take on the Cinderella fairy tale, something that has a bit of uniqueness to it while staying true to the gist of the story.

Wahoo! The library has it! Awesome.

yep, that cover is really beautiful. sounds like an interesting read.
http://thebookworm07.blogspot.com/