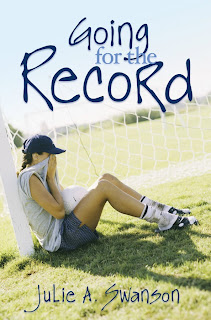 Leah Weiczynkowski is seventeen years old. She's a soccer player who has wonderful news for her father: she's just made the Region II Under-18 Olympic Developmental Program team with an opportunity in August of making the National team. But her father has news of his own: during the week she was away at soccer camp, he was diagnosed with terminal cancer and he only has three months to live.

Leah, of course, is in a state of shock and disbelief. She doesn't want to accept the news--and does everything she can to deny it. He doesn't look that sick. Maybe the doctors were wrong. Maybe he'll be miraculously healed. Maybe they're some kind of cure or alternative treatment that will save his life. She goes to the bookstore and finds all of these self-healing, positive-thinking books and she also goes to the nutrition store and buys all these alternative type drugs. But her father will have none of it. He is past the stage of denial....he knows that whether or not he is ready to die...or whether or not his family is ready for him to die...that he really has no choice in the matter.

Leah's father signs a living will stating that he does not want any life-saving measures to be taken. He wants to die at home away from the hospital. He is in the hospice program. They have nurses come to the house regularly to care for him. They give him pain killers to ease his pain and keep him comfortable.

Leah doesn't know how to react or how to live her life with her father dying in front of her eyes. Practicing soccer three or four hours a day...driving around with friends....shopping at the mall...etc...all seem pointlessly unsignificant in the scope of things. She doesn't want to lose a moment of time with her father. But at the same time, he's urging her not to give up her dreams to sit home and watch him die. He wants her to go to soccer camp and try to make the National team--after all, hasn't that what she's been working hard for all these years? During this time she's very angry. She's angry and acting out against her friends.

She goes to camp, but with a heavy heart, a few days into camp...she's called home. Her father's failing. He is not quite ready to die yet. But this close call forces Leah out of denial. The whole family is hoping, praying, begging that he will be able to live long enough to see the birth of his first grandchild due the first week of September. All of the family--Leah's older brother Paul, and her pregnant sister Mary--come home to say goodbye. Her uncles and aunts say their goodbyes. But eventually Leah and her mom are left at home with him watching him die.

A few weeks before his close call, the father and daughter have a chat about how he is ready to die...and how he's ready to go home and be with Jesus. And although Leah's relunctant to let him go...to give him permission to go...the more pain she sees her father in...the weaker he gets...the more disoriented and disconnected he is from reality...she begins to realize the kindest thing in the world would be to let her father go...to not pray for his recovery...but pray that God would take him...that God would spare him another day of pain.

He survives several days past the birth of his grandchild...but as soon as he hears news of its birth...he begins to let go...he disconnects himself from the world...and his family. His condition starts to deteriorate quickly. It was true that he was fighting to hold on to life for the birth...and now he has no reason to keep fighting...he can just let go.

After his death, she's very depressed--naturally--and she is hesitant to enter social life. She has no interest in ever playing soccer again. She does patch things up with her friend Clay...but mainly this is a slow healing process for her.

This is one of the hardest books I've ever read. It is a very accurate, realistic, honest look at how it feels to watch someone you love very deeply die. The book had me close to tears in several places. The feelings were just so true--so honest. My grandfather died of bladder cancer and was in hospice...and reading those chapters about his last few weeks...were just so right. The author just got everything right in those scenes. Anyway, it was a powerful well written novel.

© Becky Laney of Becky's Book Reviews
Posted by Becky at 9:56 AM