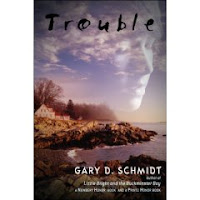 Henry Smith's father told him that if you build your house far enough away from Trouble, then Trouble will never find you.

Henry is the youngest in the Smith family. His older siblings, Franklin and Louise, attend high school. Franklin is, in fact, a senior getting ready to graduate. Henry is--and always has been--following in Franklin's footsteps for better or worse. Always being compared to his older and much beloved brother. When a fellow student, a teen, a Cambodian immigrant, accidentally runs Franklin over with his car--he falls asleep behind the wheel supposedly--Henry's life changes forever.

Accident or foul play? That's what everyone (and I do mean everyone) is thinking when they hear the news. The fact that the driver in question is an immigrant makes the accident all that much more complicated. It seems this community has been waiting for the day to let out a bit of hatred towards these new folks in the community.

As Franklin's life hangs in the balance--he's lost an arm and is in a coma--the Smith family (and the whole community) begins to unravel and crumble. The Smith family is in crisis. Big-time crisis. No longer able to function, to communicate, to unite as one in this difficult time. Everyone is reacting in their own way, a way that seems strange and unnatural to the others in the family. But feels right to that person.

How Henry copes is by making a new friend, a dog named "Black Dog." He rescues this dog from the sea one day soon after the accident. This trouble-loving dog seems to be just what Henry needs, what this family needs. My favorite part of this book was any scene with Black Dog. There was an enjoyable character!

Trouble is a strange book for me. And I don't mean the book is strange in the Twilight-Zone sense. I mean I had a strange reaction to it. Perhaps you'll have a different response. Maybe. I hope. Anyway, I felt the characters were very disconnected. They had a hard time relating to one another, it's true, but I had a hard time relating to them as well--both individually and collectively. I had a hard time "knowing" or "liking" or "understanding" these characters. This could be stylistic. Meaning, Schmidt wanted the reader to feel the way Henry felt. Isolated and confused and out of sync with his family, out of sync with his world. If that is the case, then it works beautifully. It felt disjointed. I felt very removed from the characters, very removed from the plot. But as I said, this could be intentional. Or it could be just me. The reviews I've seen tend to love it. So my cool reaction could just be me.

Essentially my 'trouble' with Trouble is that I didn't care. I didn't care that Franklin was hurt (and later died). What I saw of him, I hated. He was a jerk. He was so not worth shedding any tears over. And Henry didn't seem to "like" him much either. He had to love him because he was his brother. But I don't get the idea that Henry liked or respected him much. And Louisa certainly didn't either. The family seems well rid of him as far as I'm concerned. As far as the whole quest goes for climbing the mountain, I just DIDN'T get it at all. It just seemed stupid to me. I liked the fact that he came to a resolution, made peace, with Chay. I liked that he stood up for Chay. But the whole I-have-to-climb-this-mountain-or-else thing just didn't work for me. My feelings would have been different if they'd been less emphasis on this climbing-mountain (both physically and metaphorically.) As one of the people he encounters says your brother's death is not a good reason to want to climb a mountain.