About the October Bookworms Carnival 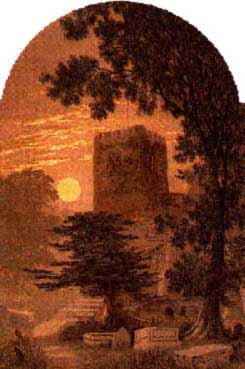 will be hosting the October Bookworms Carnival here at Becky's Book Reviews. Why am I telling you now? Well, I have come to appreciate hosts that give participants ample preparation time. My theme is the literary gothic. My inspiration was this incredible web site. It provides an author index and a title index. The author link will take you to the page of most popular authors. But the sidebar will reveal that you can search/browse alphabetically. Just because an author appears doesn't mean that every work by that author is gothic...far from it. But at the bottom of each page, they list the gothic elements of that author's bibliography. For the record, your choice doesn't have to come from this list found on the web site. To give you some idea of what I'm looking for...

What makes a work Gothic is a combination of at least some of these elements:

The Gothic creates feelings of gloom, mystery, and suspense and tends to the dramatic and the sensational, like incest, diabolism, and nameless terrors. Most of us immediately recognize the Gothic (even if we don't know the name) when we encounter it in novels, poetry, plays, movies, and TV series. For some of us--and I include myself, the prospect of safely experiencing dread or horror is thrilling and enjoyable.

Elements of the Gothic have made their way into mainstream writing. They are found in Sir Walter Scott's novels, Charlotte Bronte's Jane Eyre, and Emily Bronte's Wuthering Heights and in Romantic poetry like Samuel Coleridge's "Christabel," Lord Byron's "The Giaour," and John Keats's "The Eve of St. Agnes." A tendency to the macabre and bizarre which appears in writers like William Faulkner, Truman Capote, and Flannery O'Connor has been called Southern Gothic.

I would prefer participants to limit their focus on "literary" or "classic" gothic pieces of literature (poetry, short stories, novellas, novels). (Published before 1960) But I won't exclude your entry if you focus on more modern gothic literature.

I would encourage you to browse the Literary Gothic site between now and September so you can plan your reading accordingly. There are plenty of novels, short stories, poems, and novellas to choose from. And many are e-texts. (Though you should be able to find many at Amazon or your local library.)

Here are just a few examples:

Thanks for the advanced warning! I'm going to be reading Wuthering Heights next week but I was planning to read Jane Eyre sometime this year so I'll save that for the carnival.