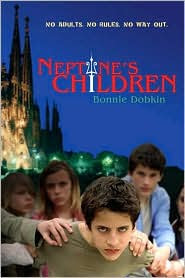 From the jacket flap: "A dream vacation at the Isles of Wonder theme park becomes a nightmare when biological terrorism causes the death of every adult on the Islands. Younger teens and children survive, only to face the resulting horror and the chaos of a world without authority. The figure of King Neptune, symbol of the Islands, unites them as they begin to build a society within the park, safe from outside dangers. Led by a group called the Core, made up mostly of former park workers' children, the survivors slowly organize their world. But when mysterious events bring danger, some of the Islanders begin to wonder if their home is as safe as they think and if their leaders can really be trusted. As suspicions grow and rivalries intensify, the stage is set for a war that will determine the future of everyone on the islands."

Intrigued? I know I was. The plot centers around Josh and his "family." (He's an older younger teen--13 or 14--and he's caring for his younger sister, Maggie. From the very beginning, he pairs up with another set of siblings--Zoe and Sam. Together they form a family unit.) In the first few days after IT happens, there is confusion. But within 48 hours, order and structure and authority are introduced into the theme park. Josh is one of the contributors to the sanity. The "king," the boy behind King Neptune's oddly soothing voice, is Milo. He calls all the kids together and asks the older ones--minus the babysitters--to help him. Josh is one of his volunteers, and for a while he is one of the Core, but his "family" responsibilities soon prove more important than his social ones. Through the course of a year--a little over a year--these kids survive on their own without too many glitches, but soon that changes. Little questions, little doubts, a few things that rub our characters the wrong way. Why? Why is Milo so insistent that no one ever leave the theme park? Why can't they have the freedom to leave if they want? To explore the outside world for themselves?

While some adults (and a few teens) might find this one predictable, there is much to enjoy in Neptune's Children. I found that even if I was fairly certain where everything was going, I wanted to be along for the ride, for each step in the journey. It was definitely a page-turner for me. Reminiscent of both a Star Trek episode and a Twilight Zone episode, this one was a darkly fun read.
© Becky Laney of Becky's Book Reviews
Posted by Becky at 10:32 AM

You sold me...sounds like one I'd really enjoy, even if I did find it predictable.