Travel the World: England: Narnia: Voyage of the Dawn Treader 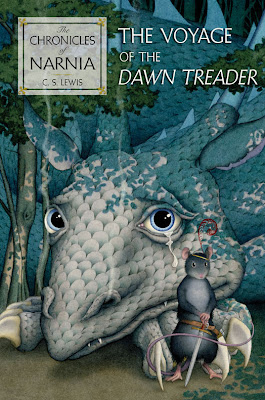 The Voyage of the Dawn Treader

by C.S. Lewis is the third novel in the seven-book series The Chronicles of Narnia. I loved both of these books--both Prince Caspian and The Lion, the Witch, and the Wardrobe. Loved. Yet I'm at a loss of words when it comes to the Voyage of the Dawn Treader. The Lion, the Witch, and The Wardrobe is the start of the magic. It is the first. It could arguably be the best. Prince Caspian has a charm all its own. It's consise; it's action-packed. It's thoroughly enjoyable. Yet The Voyage of the Dawn Treader--for me--has a certain magic all its own that I can't really explain. There are times when I feel it is my favorite. But at the same exact time I'm feeling that it's my favorite, I feel guilty for thinking that anything could be better than The Lion, the Witch, and The Wardrobe. I guess I feel I need permission to love another just as much--however differently--as I do my first love.

This is a book that had me at hello. Say what you will about the first two books, neither have a first sentence that pops or sparks with magic. "There was a boy called Eustace Clarence Scrubb, and he almost deserved it." This sentence has to be one of my favorite, favorites of all time.

It goes on to say, "His parents called him Eustace Clarence and masters called him Scrubb. I can't tell you how friends spoke to him for he had none. He didn't call his Father and Mother "Father" and "Mother", but Harold and Alberta. They were very up-to-date and advanced people. They were vegetarians, non-smokers and tee-totallers, and wore a special kind of underclothes. In their house there was very little furniture and very few clothes on beds and the windows were always open."

This is our first description of Eustace, "Eustace Clarence liked animals, especially beetles, if they were dead and pinned on a card. He liked books if they were books of information and had pictures of grain elevators or of fat foreign children doing exercises in modern schools." 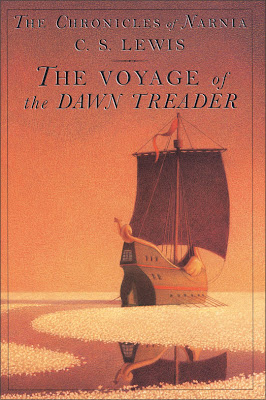 Can you tell already that The Voyage of the Dawn Treader is unique but uniquely wonderful? Eustace, as the reader soon learns, is the cousin of Peter, Susan, Edmund, and Lucy. And The Voyage of the Dawn Treader is the story of what happens when Lucy and Edmund go to visit their most unpleasant cousin. You'll find that magic follows the Pevensies wherever they go. This time the magic doesn't come from a wardrobe or the blowing of a magical horn. This time it's a painting--a portrait of a ship sailing the ocean that "calls" or "invites" the children to an unforgettable but dangerous thoroughly adventurous journey.

Edmund and Lucy--as you can imagine--are elated, thrilled, ever-so-happy to be back in Narnia. To be reunited with their good friend, Prince Caspian. But Eustace is miserable, cranky, mean, and downright unpleasant.

The dangers they face on their journey are unique. They're not like the dangers faced in The Lion, The Witch, and the Wardrobe or even the dangers faced in Prince Caspian. There are more dangers to be faced overall. But they're subtler. Quieter. The book has them sailing along on the seas, then occasionally stopping at various islands--some known, most unknown. Each chapter (though sometimes several chapters are related) has an adventure all its own. The novel is a handful of episodes, mini-adventures if you will. All of them unique. All of them memorable. Some episodes, I think I'll carry with me always. There's just something about this novel that just works for me.

© Becky Laney of Becky's Book Reviews
Posted by Becky at 10:16 AM

This one has my favorite entry into Narnia. And I love the story of the growth Eustace experiences, and the symbolism of the dragon scales coming off.

It's been quite a while since I read this one. Part of me thinks I should reread all the Narnia books, but another part wonders if they can possibly be as much fun as the first time round.

That is a really fun cover, that first one. I've never seen that but really like it.

I thought "The Magician's Nephew" was the first book. I just recently finished it and loved it. At the rate I'm going, it will be months before I get to "Voyage." I own the one with the second book cover, but love that first one you showed.

I like that you put up several different cover images. I've never seen that first one, before.