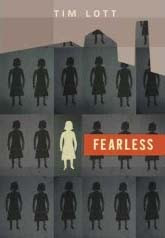 The girl could hear sobbing in the front room. Her mother was always crying about something or other, so the girl didn't take much notice. She just kept staring at the vidscreen in the corner of her bedroom. It was playing a vacation ad, all blue sea and white waves and sand like a field of honey. She wished she could just climb into the vidscreen and stretch out on the sand, dip her toes into the water, and never return. She would stay there and watch the world from the other side of the screen.
Then the knocking on the front door began. The girl thought that was odd, because they had a perfectly good doorbell. The knock seemed almost like a message. It went rap-rap-rappety-rap, as if it were a friend or a neighbor who always did their own special knock. But friends never came after dark, and the neighbors kept to themselves.
The girl heard a noise behind her. She turned and saw her mother. A dark birthmark the size of a fingernail and the shape of a star protruded from her hairline. Her cheeks were still damp from crying; her eyes were red and scrunched up like meat from a butcher's shop. She hadn't answered the door. Instead she lifted the girl up and pressed their faces together. The girl kissed her mother and tasted salt.. Her mother smiled, as if to tell her that everything was OK. Then she said she had some presents for her. The girl didn't understand. Her birthday was months away.
Her mother produced a small cloth bag and brought out three objects. The first was a picture of the girl's grandmother and grandfather, mounted in a bronze frame. Her grandfather wore a black suit with a cravat, and her grandmother wore a long pale dress and a floppy dark hat.
The second was a beautiful old silver watch with a fine leather strap that she said had once belonged to her father. She said she ought to have something to remind her that she did once have a father.
Finally she gave the girl once more thing: a golden locket containing a tiny photograph of her mother on her wedding day. She hung it gravely around the girl's neck. Then she put the framed photo and the watch back into the little cloth bag, handed it to the girl, and kissed her.
The knock on the door came again, louder this time. Rap-rap-rappety-rap. Her mother left the room. The girl heard the door catch being released, and then her mother began to shout. She heard a man's voice, stern and official sounding.
A few seconds later, a man wearing a uniform and a black peaked cap walked into the girl's room and, without a word, lifted her up. She could see her mother crying. The man didn't pause to let her say goodbye to her mother. He started to carry her down the stairs. The girl went limp. She felt unable to speak.
The door closed behind her. Then she heard her mother's voice through the thin panel of wood.
The locket. Read the words. Never forget the words on the locket.
In the harsh light of the street, the girl studied the back of the locket. She could just make out three lines of faint engraving. The girl pushed the locket inside her blouse and closed her eyes. She didn't resist as the man bundled her into the back of the ugly gray car with no side windows, started the engine, and drove away into the darkness. (3-5)

Fearless or "Little Fearless" is just one of many girls imprisoned at the "City Community Faith School." There the girls have no name, no identity other than a letter and a number. The institution--be it prison or school or work camp--is composed of X's Y's and Z's. The X girls being ranked higher than the Z girls meaning they have higher privileges in a way but also higher responsibilities. They get to be "X" girls by doing the bidding of The Controller. In other words, they work for the enemy.

Fearless and her friends--Beauty, Soapdish, Tattle, and Stargazer--are in a hopeless situation. They all are. Imprisoned, worked to exhaustion, malnourished, unloved and mistreated, the girls are emotionally and physically starving. Fearless is popular--at least somewhat popular--among the girls because she tells stories of hope. She tells stories of the day when they'll all be free. Stories of the girls reuniting with family. Of the girls leaving for the outside world. Fantasies at this point as far as most girls are concerned but oh-how-good-it-sounds. Fearless and Stargazer believe, however, that their freedom will come. The day will arrive when someone will rescue them.

Fearless knows however that NO ONE can rescue them, will rescue them, unless they know the truth. She believes with all her heart and soul that the reason they're still there, still miserable, is that the public, the men and women of the city simply do not know the truth. The truth will set you free, right? If Fearless can escape to tell her story, help will come won't it? It has to, right?

This story is emotional and heartbreaking. Some might argue that it is more than a little predictable. But that might be a matter of age and experience of the reader, the more you've read the genre, the more familiar you are with the twists and turns one is likely to take. Others might think it's a bit too parablesque. More obvious than subtle. More a loud shout than a whisper. I agree in part. But I think that when it comes down to it you either believe or you don't believe. Little Fearless either touches you, resonates with you, or she doesn't. I believe that Fearless, the book not the character, can work for some readers. Not for every reader, but then again no book works for every reader. (For example, the plot twist where Fearless gathers the tears of every girl and captures them in a perfume bottle. And then later that perfume bottle is analyzed to reveal the exact number of tears. It's silly and requires you to suspend your disbelief long enough to go with the flow. And it's not the only plot element that requires this suspension of belief. If you care enough about Fearless, then you can go with the flow and overlook a few things that don't quite work.)

The book offers a way to look at life, at humanity. While it is not a perfect novel, for me at least, it worked well enough for me to lose myself in Fearless's world. While I read this book, followed her journey, I was hooked. Only time will tell if this one stays with me like The Giver and other such novels.

As dystopian fiction, it definitely portrays a world that would qualify for my "It's The End of the World As We Know It" challenge under the category of evil governments. It's not too late to join that challenge by the way. Here's a list of participants so far.

Other reviews: here, here, and here. Most reviews I found were skeptical at best and found more than a little to criticize. I think that might have influenced me to give the book the benefit of the doubt a little bit more than I might otherwise. I'm contrary like that.

© Becky Laney of Becky's Book Reviews
Posted by Becky at 10:57 AM

I agree with you, Becky: "Fearless, the book not the character, can work for some readers." It didn't quite work for me, but there were some very nice things about it. It's good to read your contrarian perspective.

There were some nice bits of writing, but everything else was too distracting for me. I'm glad you liked it though.

I'm putting it on hold to take a look at it myself. Sounds interesting.