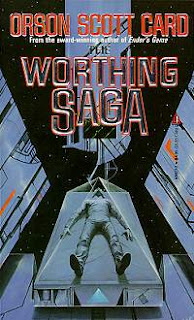 Becky's Online Reading Group will be reading The Worthing Saga by Orson Scott Card for the month of June. Orson Scott Card--as many of you know--is one of my favorite, favorite, favorite authors. And this book isn't as widely known (and as widely read) as his Ender series. (Ender's Game, Speaker for the Dead, Xenocide, Children of the Mind, Ender's Shadow, etc.) I'm choosing this one because I love it, obviously, but also because I hope to encourage others to read it as well. You can read the first chapter online here. Discussions will be on Mondays and Fridays, except for the weekend of the 48 Hour Readathon. It will be one day early that week.

"This book brings together all the Worthing stories for the first time in one volume. In a way, the Worthing tales are at the root of my work in science fiction..."

t was a miracle of science that permitted human beings to live, if not forever, then for a long, long time. Some people, anyway. The rich, the powerful - they lived their lives at the rate of one year every ten. Somec created two societies: that of people who lived out their normal span and died, and those who slept away the decades, skipping over the intervening years and events, It allowed great plans to be put in motion. It allowed interstellar Empires to be built. It came near to destroying humanity.

After a long, long time of decadence and stagnation, a few seed ships were sent out to save our species. They carried human embryos and supplies, and teaching robots, and one man. The Worthing Saga is the story of one of these men, Jason Worthing, and the world he found for the seed he carried.

New to Becky's Online Reading Group. See the 'about' page to answer your questions about participation.
Posted by Becky at 1:40 PM