Confessions of A Serial Kisser 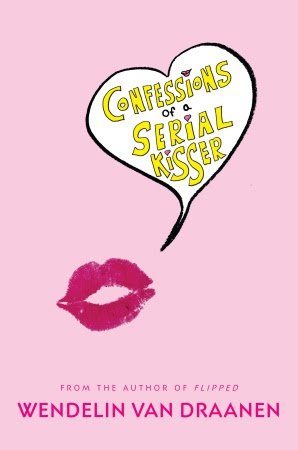 I'm on the fence with Confessions of A Serial Kisser. I loved the opening chapters where we are introduced to the narrator, Evangeline, and catch a glimpse of the premise. A young teen girl, who discovers, while cleaning, her mother's stash of trashy, smutty romance books. Out of pure curiosity and with a bit of disdain, she starts looking at them. She starts by reading the blurbs, then progresses to reading random passages. But before long, her attention focuses in on one title in particular, A Crimson Kiss. Delilah and Grayson become role models, in a weird way, for our heroine since her own parents are going through a separation or divorce. She reads the book--along with some of the others I believe--but it is this one book that she keeps clinging to. She reads it again and again and again. She even takes it with her to school. She makes her best friend read it as well. She begins longing for a crimson kiss of her own. And with a little inspiration from a self-help book, she sets out to get that kiss, to find that dreamy guy. It may sound like a silly premise--and I admit that it is in a way--yet it is fun in a giddy-making kind of way. I was feeling a bit of an Angus, Thongs, and Full-Frontal Snogging vibe for a bit. But Evangeline has more character development (more depth, more growth) in this one novel than poor Georgia has had in all of those novels put together.

But that is only the surface of this one. If it was just that, folks might think it fun but shallow. But roughly halfway through the focus shifts dramatically over to her relationship with her father. Evangeline has a terrible awful horrible no good relationship with her dad since the separation. (Her father, I think, cheated on her mother and left them. And it is her self-esteem, her sense of security that is suffering as a result of that betrayal.) And it is this angst that is driving--contributing--to the problems in other areas in her life. Evangeline is looking for her crimson kiss, but she's not finding it. She's hopelessly caught up in things trivially not imagining that a kiss is more, can be more than just a kiss.

In some ways, Confessions of A Serial Kisser isn't your traditional romance. There isn't the traditional boy meets girl plot. (Or girl meets guy.) It is about the quest for love coming from a dissatisfaction with yourself; it's all about the angst, looking for someone to fill that emptiness inside you. It's about not knowing quite what you want, but knowing that you want something...need something more.

All that being said, there were some things that just didn't work for me. The longer I read about Evangeline, the less I cared for her. I know that sounds a bit harsh, doesn't it? Evangeline is losing herself, drowning herself in this quest for the perfect kiss. The further this quest goes on, the less respect we have for her and the less respect she has for herself. And there were some places where the text dragged a bit. It's hard to explain really. But there would be chapters at a time where I'd catch myself skimming paragraph after paragraph and yet finding nothing happening, nothing changing. After half a dozen of those chapters, it's hard to maintain interest. It started so well, and yet fizzled out a bit for me.

It has family drama (father-daughter), friend drama, and some boy drama. (Yet the focus is never really on one guy in particular.) I liked the premise--or should I say premises. It was fun to see the mostly funny spin on how unrealistic and silly but sometimes necessary romance novels. It was also interesting to see this father-daughter angst. How her anger, her disappointment, her feeling of loss and betrayal, fueled (or failed to fuel) her relationships with guys her own age. But the focus is split--and not just in two. The friend drama...well...I could have done without it. The plot was busy enough without it. But maybe others will feel differently.

Other reviews: Bookshelves of Doom;What I Blogged: ; Biblio File: and The Well Read Child and Overdue Books.

First sentence: My name is Evangeline Bianca Logan, and I am a serial kisser. I haven't always been a serial kisser. There was a time not that long ago when I had next to no kissing experience. It's interesting how things can change so fast--how you can go from being sixteen with very few lip-locking credentials to being barely seventeen and a certified serial kisser. It all started one day with dirty laundry. (1)