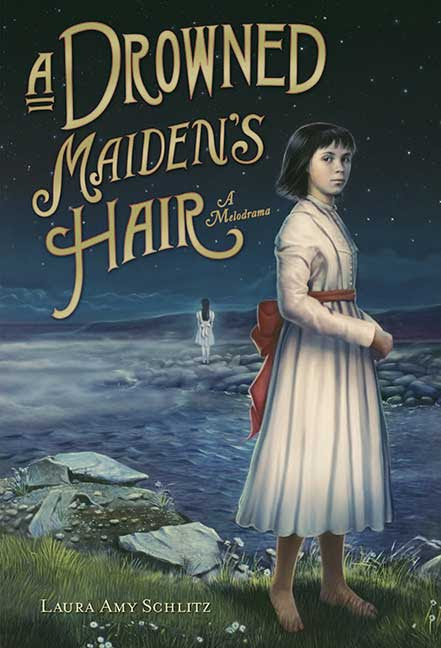 <em>On the morning of the best day of her life, Maud Flynn was locked in the outhouse singing "The Battle Hymn of the Republic."</em>

What a first line! It continues, "She was locked in because she was being punished. The Barbary Asylum for Female Orphans was overcrowded; every room in the wide brick building was in use. There were very few places where one could imprison a child who had misbehaved. The outhouse was one such place, and very suitable for the purpose, because the children hated it." That says something doesn't it. Sets the tone, I mean. This is one of those orphan stories. We learn on the next page that there are two women coming, the Misses Hawthorne, who are looking to adopt a cute, well-behaved child. Maud as an independent free-thinker, and as an eleven year old clearly isn't the girl for them, right? The powers that be know that no one would ever voluntarily take Maud off their hands. But they weren't reckoning on the Misses Hawthorne being quite the way they were either.

It is Maud--the loud, singing, often-rebellious, Maud--that the Misses Hawthorne--especially Hyacinth are drawn to that day. It is Maud that is the girl for them. Maud is ecstatic. She's wanted. She's really and truly wanted. She'll have a home, a real home. A home with three guardians, three protectors. It's her dream come true.

But Maud realizes slowly that the dream isn't quite a good one as she'd hoped. There is something not quite right, something secret, something mysterious about the whole affair, the whole ordeal. Maud won't be kept in the dark for long....

Maud is quite a heroine. You can't help but enjoy spending time with her. And I thoroughly enjoyed A Drowned Maiden's Hair. It may not be for everyone. I could imagine it not sitting so well with some types--those that feel spiritualism is not appropriate for children's literature even if these so-called mediums are phonies and no ghosts actually appear. It's an emotional story--a compelling journey of one girl's quest for love, acceptance, and home--with a satisfying conclusion.

Blogged with the Flock Browser
Posted by Becky at 8:42 PM

LOVED, LOVED, LOVED this book when it first came out, Becky. Fun to read your review!

The cover for this one is fantastic and the story sounds equally so. I'll put it on my list!

*sigh* I guess I am not going to end Carls challenge without adding yet another book!

This one sounds great! I'm going to check this one out for sure.

What type of book is it? It sounds great

This was a great book!

I am 8 years old and I read 1/2 the book so far with my Mom and it's already good. I like all the surprises in the story! And I like that Maud is naughty--makes it fun to read.
PS: READ THE BOOK!!!

I am 13 and I love this book I finished half of the book the first night! I love the poem that goes with it! It is so mysterious!

I just finished this book for Language Arts and loved it. I really recommend it.

I've read this book and it was amazing!!! I read it for my library book!!! It is my favorite book. I LOVE The irony at the end!!! I am 12 and i have read this magnifacent book!!!

I am not one that loves to read, but this book changed my perspective on reading! This book kept me on the edge of my seat. Not too many books catch me the way thus one did. This book is my favorite book! I would recommend this book to every one. This one is a must read!!!

I've read it and i loved it. I would definitely read it again and again.