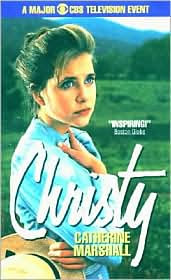 Except for a brief prologue, Christy is set in the mountains of Tennessee (the Smokies) in the early 1910s (the novel opens in 1912, and I *believe* it covers maybe a year to two years tops. So probably 1912-1913 or possibly even 1914). Christy Huddleston is our heroine. She is nineteen and leaving her home in Asheville, North Carolina. Her mission is to teach in a one-room school house, a school started by a mission, in Cutter Gap, a small mountain community. She's in for quite a culture shock let me tell you. I think we would all be in for a culture shock. What we see is life through her eyes--at first innocent and naive--but later as she's grown and matured through the eyes of love, mercy, and grace.

Based on a true story, Christy is a coming-of-age story. One woman, one small but determined young woman, who is out to save the world one child, one adult, at a time. Her optimism, her hope, her love is balanced with the gritty portrayal of harsh, often-primitive conditions. It's not only the landscape that is harsh and rugged, but the mindset as well. Christy travels from the twentieth century modern world to the mountains where feuds and murders and such are common. It's not all ugly and harsh, there are things of great beauty, great joy, as well. Christy sees it all--the good, the bad, the ugly, the regrettable, the hopeful and inspiring.

Part story. Part commentary. Christy is an enjoyable book. I'm not sure all readers will appreciate these little asides that document the life of a school teacher, the life of a Christian, but I believe many will. Christy, like so many other young people, is on quest to see who she is and what she's made of. She's a bit unsure of herself. She's full of questions but not on answers. Her quest to grow, to learn, to understand is one that I feel most can relate to in one way or the other.

There is some romance. But I'd hesitate to classify it fully as a romance. I think it would probably be found wanting if you stuck that label on it. Yes, there is a love story. But it is just one of the small threads running through the novel. It is a story about humanity, about life, about death, about friendship, about finding meaning and significance in all our days. It's an emotional journey, a realistic journey.

There have been at least two adaptations of Christy. There was a television show starring Kellie Martin, and there were a series (three) of made-for-television movies starring Lauren Lee Smith. Both versions featured Stewart Finlay-McLennan as Doc MacNeill. That was a good thing. I admit I have a weakness for the third and final movie, Choices of the Heart, part 2. Though all adaptations take some liberty with the book.

Blogged with the Flock Browser
Posted by Becky at 1:31 PM

I watched the TV show when I was younger and I LOVED it. My sister and I always wanted Christy to marry Doc MacNeill ... I think we were both secretly in love with him! ~LOL~

I really, really love this book. I've read it four or five times. I do admit, however, that it's not for everyone. It was one of the first books I read that really made me think about my purpose in the world -- Christy set off to change at least one small part of her world -- what could I do?

I really love this book too! One of my all-time favs. I've never seen any of the tv versions though

I'm so pleased to see that others loved/love this one too. Doc MacNeill was really something :)

I too loved this book.
In the book she talked about how much the children craved human touch. And when she put the children on her lap they read better. For some reason that was very profound to me and I have always remembered it. You can probably guess where my kids are when we are reading together.

I totally loved this book when I read it as a teenager. But I always seem to forget about when listing favorites! I should go add it to my list right now....

I watched the TV series, but I was too busy watching Kellie Martin's boobs to see what was going on...

One of my very favorite books. I didn't know that was a series of made-for-television movies based on Christy. And you recommend them?

Sherry, yes and no. The plot of the movies were somewhat mostly faithful to the book. (They added a flood in there somewhere in addition to the typhoid.) Also the movies had Christy be officially engaged to David and planning her wedding to him. In the book, she never accepted his proposal, let alone started planning her wedding. But I just love Dr. MacNeill so much that it worked for me to a certain extent. The TV show I wasn't that big a fan of really. Something about Kellie Martin annoyed me I'm not quite sure why.

I just wanted to tell you that your blog is beautiful! I love all the book reading art pieces.