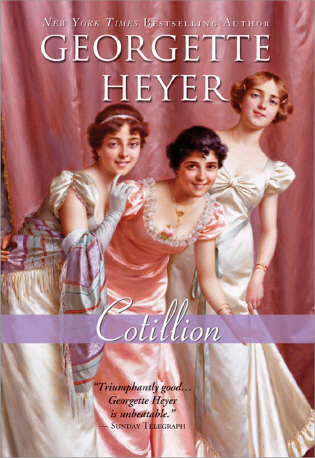 First sentence: The saloon, like every other room in Arnside House, was large and lofty, and had been furnished, possibly some twenty years earlier, in what had then been the first style of elegance.

It may not have you at hello, but this Regency romance is quite satisfying by the end. Quite happy-making actually. Though the first few chapters may take some patience, by the time the action moves to London and out of the country, this book begins to shine. It is the story of a young woman, Kitty, who stands to inherit a bit of money if she will marry one of her "cousins." Mind you, in this situation, the term is used loosely in that Kitty was an orphaned child an old man had taken in and raised. These "cousins" are his great-nephews. There are five: George (who is married so he's ineligible), Hugh, (a clergyman), Foster (the Mama's boy of all Mama's boys), Jack (who doesn't bother to show up because he's too busy gambling and being a Rake) and Freddy. Kitty, who is just a girl of eighteen or nineteen, wants to get out of the house, out of the country, and she sees a sham engagement to Freddy as her way out. If they become engaged, then surely he must take her to London to meet his family. He must. And if she should get some shopping and socializing in--operas and balls and such--then so much the better. Kitty, honest girl that she is, doesn't try to fool him. She's upfront from the start. This "phony" engagement is her idea from start to finish, and Freddy does take some convincing there at the start.

Soon after their arrival in London, Kitty begins her stay with her future-sister-in-law, Meg. Meg is married, but her husband is out of town. Out of the country in fact. And Meg sees Kitty as a way to have a chaperon or companion that isn't all-too-clever in the ways of the ton. Also for Meg taking on Kitty as a project is fun for her. London is a whole new world for Kitty. New places to see, new people to meet, and a few old acquaintances to bump into as well.

Georgette Heyer's Cotillion reads like a cross of Fanny Burney and Jane Austen. In particular, Burney's Camilla and Austen's Emma.

While I found all of the novel to be enjoyable, the last hundred pages were incredibly so. The pace quickens dramatically and everything seems to happen all at once. All the small little details that were introduced one by one in the first half of the novel all begin to come together quite rapidly. The clearer the big picture becomes, the more satisfying it is.

Blogged with the Flock Browser
Posted by Becky at 3:16 PM

Hi Becky!
I just wanted to thank you for stopping by my blog last week. I have answered the question you left for me!
*smiles*
Kim
http://pageafterpage-kim.blogspot.com/2008/07/book-review-2-for-weekly-geeks.html

Sounds like a fun one, Becky! I have a huge pile from the library of things you've reviewed. Hopefully I'll get out of blogland and go do some reading! I posted about historical stuff today, too!

I love Georgette Heyer's books, and am very happy that Sourcebook has been reissuing them. I recently read this one, too, and enjoyed it a lot.

I love Gerogette Heyer. I haven't read this one yet but it sounds good, I think my favorite by her so far is "The Masqueraders." Very witty and amusing.