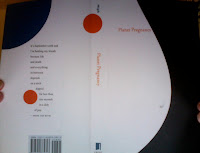 Planet Pregnancy is a novel in free verse. Sahara, our narrator, is sixteen going on seventeen. And, as you can guess from the title and cover, her whole world is about to change. Here is how we meet Sahara:

It's September tenth and
I'm holding my breath
because life
and death
and everything
in-between
depends
on a stick
dipped
for less than
ten seconds
in a dish
of pee.

A page or two further...

My name's Sahara,
like the desert.
Unlike the Badlands,
though,
I'm not barren.

Sahara has quite a predicament on her hands no doubt about it. Scared to tell her mother, she keeps her pregnancy a secret from practically everyone. She tells only her closest friend, and even then, she waits until the second trimester.

I remember seeing girls like Sahara on various talk shows. I saw a Dr. Phil episode last week in fact about girls keeping their pregnancies secret, about moms that are so clueless when it comes to knowing, to observing, to seeing what is right in front of them. So there's not a doubt in my mind that this is a realistic portrayal.

As for the poetry itself, it's not perfect. I'm on the fence about it actually. There are places where it's got a certain rhythm, where it seems to work. But there are other places, many places, where it rhymes too much. The rhymes just don't work for me. They sound authentically amateurish. Like they could be how a sixteen-or-seventeen year old might choose to document their life. For me the rhymes took me out of the story. Were a distraction.

School is so
not cool.
The teachers
are geeks,
and the weeks
drag like rags
through mud.
School is
crud.
At this time
next year,
I'll still be here,
waiting to graduate
in gown and cap
into the Real World
of crap. (99)

However, maybe the rhyming won't annoy other readers. Maybe it's just a personal thing. I just wish it was more natural. No one really and truly rhymes naturally that frequently. People just don't talk like that. Don't think like that.

To end on a more positive note. I think the poems do convey the emotions well. The confusion. The drama. The love. The hate. The uncertainty. The flip-flopping of emotions, of feelings, of hormones. I think it does do a good job of portraying the changes the mind and body go through as it changes through the months of pregnancy.

© Becky Laney of Becky's Book Reviews
Posted by Becky at 10:32 AM

I recently read another novel in free verse (Sharp Teeth by Toby Barlow) and after reading your excerpts I have to agree with you about the rhyming... It takes something away from the rhythmic pull of the verse. The wonderful thing about Sharp Teeth was that you forget you're reading verse. The rhyming just throws it in your face.

The rhyming is annoying me already! ;-)

It sounds interesting, but I have to agree with you that I sometimes find rhyme distracting. I just recently finished a book of Robert Frost's poetry and there's one very long free-verse poem that defends rhyme, rhythm and metre (meter?) while putting down free verse, even though he used free verse to tell the story. It was really quite fascinating. That particular poem was among my favorites -- most of the rest tended to be way too heavy on rhyme for my taste. But, I really don't "get" poetry.

I think I would probably agree with you on this one. I loved those first couple passages you quoted. At that point I was thinking this book was definitely going on my wish list. But I'm like you...that rhyming just blew it for me. It sounded forced, and fake. I'm afraid I'd end up quite annoyed with the book. Which is a shame, because it sounds like it has a lot of good to offer.

Aside from the rhyme thing, which would bother me to, this sounds really good.

I'm with ink mage on this one!