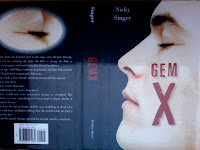 What kind of book is Gem X? According to the jacket, it is a "gripping futuristic thriller" about the consequences of genetic engineering. Gem X is the story of three teens primarily. Maxo Strang is an Enhanced human. He's got the wealth, the privilege, physically and materially he has everything going for him. Gala and Stretch are brother and sister. Both dreggies. Naturals. Their genes are still "clean." And their clean genes are really the only things they have going for them. For it is these genes which they can sale to the Enhanced scientists for money. The Dreggies--all of them--are poverty stricken, prone to disease, lacking in proper food and water and medical care. Their lives are dismal--at least on the surface. They live in broken down buildings and often lack water and electricity.

Why do the Enhanced need 'clean genes.' Well, their bodies and minds sometimes develop flaws. Clean genes are needed to fix certain problems. These scientists are far from perfect though they like to play god with the human body. Natural "meshing" is not allowed. Touching is not allowed. Everything is done 'virtually' when it comes to dating. And genetic matches must be approved by others (not sure if it's just the parents who get a vote or if the government/scientists must approve as well.) But the whole process is very cold and distant compared to what it should be.

Our story begins when Maxo discovers that he has a crack on his face. This combined with the revelation that all Gem X'ers are developing cracks (or wrinkles) on their faces. Something is wrong--desperately and dangerously wrong!

These stories connect--as you can imagine--and I suppose you could easily classify it as a thriller. It's always moving.

The premise of this one was interesting. I can't deny that. But at the same time, it failed, in a way, to work for me. While hypothetically interesting, I just didn't seem to connect with the characters. I didn't feel their angst, their pain, their confusion. Part of this could have been intentional. The Enhanced humans are supposedly free from being "bogged down" by emotional drama and whatnot. They're very cold and calculating. Very me-me-me oriented. Maxo's parents, especially his mother, is very cold, frigid, and just a horrible person. She has no heart and no depth. Maxo's father is slightly more human. He does seem to care, but for the most part he has been too blinded to really realize how much he is lacking in the fatherhood department. There are other human characters, human adult characters, that just seem odd and out of place in this text. I was never quite sure what to make of them.

Singer has created a world that is very chaotic. A world that is complex. A world that has its own organization, its own vocabulary, its own status quo. The readers never really get an orientation to its history, its politics, its society, its science. And because of that it is a world that could be a bit too confusing to readers. I can't and won't speak for everyone. But I know there were elements that confused me.

Labels: 2008, brothers and/or sisters, dystopia, YA Science Fiction, YA Thriller

Have you ever read Star Split by Kathryn Lasky? (Somehow, I suspect the answer is yes, not too many books squeak by you!) Anyway, the basic idea about genetically enhanced humans and then the lower class of "natural" people (though I can't for the life of me think of the terms they used for these two groups in the book) seems similar to this one. But I thought Star Split was very good, and I think you'd probably enjoy it, too.