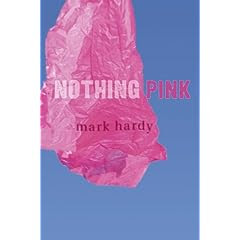 First sentence: My father begs people to come down to the altar, to get right with God.

As a preacher's kid, Vincent, has many reasons to feel uncomfortable. Not wanting to bring shame to his father and mother, but wanting to remain true to who he is, he has quite an internal dilemma. You see, he's gay. He's always known he was gay. And though he's never even held hands with a boy, he feels guilty about his homosexuality. In fact, every altar call his father gives, he feels drawn to make the walk down the aisle, to pray once again that he be delivered from this shame, from this sin. Time and time again he's prayed. He's read his Bible, his whole Bible--three times. He knows all the hymns. He's listened to all the sermons. God is never far from his thoughts--not really--and this closeness with God is something he longs to experience. Yet his gayness, his homosexuality, is part of who he is. And it is something that he wrestles with through the book, Nothing Pink, as he experiences his first love with another church-going boy, Robert Ingle. And as he falls in love, he begins to love himself just the way he is. How could loving someone be wrong, he reasons with himself? Vincent's journey is one from self-loathing to self-acceptance. The question for Vincent is simple but profound...can Vincent be a gay man who loves God? Or does accepting his sexuality mean turning his back on God. Both his spirituality and his homosexuality are part of who he is, part of his identity.

Set in the late seventies or possibly even the very early eighties (I'm judging based on cultural references to John Travolta, Barry Manilow, Commodores, The Dating Game, Farrah Fawcett, Wild Wild West, Mork and Mindy, Three's Company, Emergency.) the novel is rich in detail and character development. This is one of the first truly compelling male/male romances I've encountered where it seems authentic and not "issue"y if that makes sense. In other words, this book goes beyond stereotypes and has layer upon layer. It's a very human book. (I'm used to seeing books where there is always a "gay" best friend that plays a very limited role in the book as a whole. They're always stereotypically the same. And always just sidekicks. There for straight-women to confide in, shop with, and have crushes on. This one is a rather refreshing change from all that.