Revisiting The Dead and The Gone 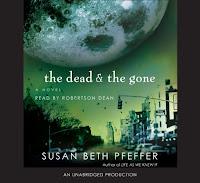 Yesterday, I finished listening to the audio book of the dead and the gone. And it was good. How could it not be good. Though with audio books, the narrator is an essential component of "liking" or "not liking" a particular production, it remains at heart Pfeffer's stories, words, characters. And they're strong enough to carry any narration. Not that Robertson Dean needs much help. But still. I'm just saying it would be hard to completely ruin the book since it's so compelling and intense on its own.

Robertson Dean. What can I say. His voice is nice, strong, clear, deep, and low. Did I buy him as a 17 year old boy or as a 12 year old girl? Or as a girl of any age for that matter? No. Of course not. But the rare occasions when dialogue is part of the action, when Julie or Briana's voices must be heard--his voices for the two sisters are adequate. (Probably no more odd than when the narrator of Life As We Knew It had to do the voices for Miranda's two brothers Matt and Jonny.)

Scenes. Listening to the audio book made certain scenes even stronger, more vivid. The emotional scenes packed more of a punch. I think this is because in an audio book you can't speed up. You can't rush through a text. You can't get caught up in the drama of racing through to the end. You're stuck in the moment. And if the moment is painful, emotional, and traumatic--if you've read it you probably can guess which scenes I'm talking about--then it's even more so, the situation is magnified. This can be good or bad. Good in that the intensity, the drama, feels immediate. You can't help but feel right along with the characters. Bad in that it can haunt you even more than the text itself.

So if you've got access to the dead and the gone at your library, you should definitely consider giving this one a listen.

I just realized that I've *assumed* you were familiar with the dead and the gone and life as we knew it. You can read my full review here. But here's a bit to ground you.

the dead and the gone is the much-anticipated follow up novel to Life As We Knew It. Though the characters and setting are different--New York not Pennsylvania--the terror and uncertainty of future days is the same. Our narrator is Alex Morales, an older teen (perhaps 17?), whose world is about to be turned upside down. While there was set up in Life As We Knew It, the dead and the gone begins with the BIG event. Wednesday, May 18... At the moment when life as he had known it changed forever, Alex Morales was behind the counter at Joey's pizza, slicing a spinach pesto pie into eight roughly equal pieces. (1). Of course, at that moment, Alex doesn't know that. He's just your average teen. His mom was a nurse called into work that evening unexpectedly. His dad was out of the country attending the funeral of Alex's grandmother. His older brother, Carlos, is away from home and in the Marines. Thus when the calamity happens, it is on Alex and Alex alone to protect his family--his two younger sisters--and begin the fight for their ultimate survival.
Life As We Knew It is a novel that I first reviewed in November of 2006. In September of 2007, I reviewed the audio book . My interview with Susan Beth Pfeffer can be found here.
Blogged with the Flock Browser
Posted by Becky at 11:24 AM

Labels: "D" Titles, "P" Authors, 2008, audio books, brothers and/or sisters, dystopia, It's the End of the World As We Know It, YA Fiction

I know what you mean about the right narrator. Sometimes an audio book is ruined for me if the right person or voice style is not to my liking.

Yes, the reader's voice can make or break a book. We listened to 'The Voyage of the Dawn Treader' on audiobook during a long drive over the weekend, read by Derek Jacobi. WOW! Absolutely perfect... the accent, the voices, the expression. I'll never read the book again without hearing his voice in my head.