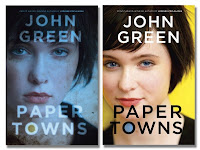 Prologue opening paragraph: The way I figure it, everyone gets a miracle. Like, I will probably never be struck by lightning, or win a Nobel Prize, or become the dictator of a small nation in the Pacific Islands, or contract terminal ear cancer, or spontaneously combust. But if you consider all the unlikely things together, at least one of them will probably happen to each of us. I could have seen it rain frogs. I could have stepped foot on Mars. I could have been eaten by a whale. I could have married the queen of England or survived months at sea. But my miracle was different. My miracle was this: out of all the houses in all the subdivisions in all of Florida, I ended up living next door to Margo Roth Spiegelman.

First sentence: The longest day of my life began tardily.

My favorite quote: I spent the next three hours in classrooms, trying not to look at the clocks above various blackboards, and then looking at the clocks, and then being amazed that only a few minutes had passed since I last looked at the clock. I'd had nearly four years of experience looking at these clocks, but their sluggishness never ceased to surprise. If I am ever told that I have one day to live, I will head straight for the hallowed halls of Winter Park High School, where a day has been known to last a thousand years. (18)

Quentin Jacobsen, our narrator, has been trying to puzzle out the mystery that is Margo for years now. And as their senior year comes to a close, the mystery is only deepening as far as he's concerned. It all starts with a late night visit. Margo appears at his bedroom window asking Quentin to join her in some mischievous revenge--she needs his car, or rather she needs his mom's car. And Quentin, or Q as she calls him, would do anything and everything for this once-in-a-lifetime opportunity to spend some quality time with the girl of his dreams.

What happens that night and in the following weeks will shape Quentin in ways he never would--never could have--expected.

John Green's first novel, Looking for Alaska, won the Printz award in 2006. Green's second novel, An Abundance of Katherines, earned a Printz honor. And, of course, along the way he's picked up an enormous number of fans both through his books and his vlogging with the Brotherhood 2.0. (And though that's over and done with, more videos and blogging can be seen on the Nerdfighters Ning site.

Note: I'm reviewing an ARC, so keep that in mind when I'm pulling a few quotes out. They may or may not be the same as what makes it into the finished book that will be released in October.

Bart's Bookshelf asks, "I've not read any John Green, so have you a favourite quote/line from Paper Towns that best sums up the relationship of the main protagonists?"

I've already quoted a bit of this one. But here are two more that will give you a feel for the book:

"Margo always loved mysteries. And in everything that came afterward, I could never stop thinking that maybe she loved mysteries so much that she became one." (8)

"I smiled. She smiled. I believed the smile. We walked to the stairs and then ran down them. At the bottom of each flight, I jumped off the bottom step and clicked my heels to make her laugh, and she laughed. I thought I was cheering her up. I thought she was cheerable. I thought maybe if I could be confident, something might happen between us. I was wrong." (58)

Jennie asks, "Is Paper Towns everything that we've now come to expect from John Green? Because I'm DYING to read this one!!! Will I just be disappointed, so is my internal hype well-deserved?"

Yes. If you've followed his vlogging and come to love his personality just as much as his fiction, then you won't be disappointed. Green's personality shines through on this one. I haven't read An Abundance of Katherines yet, but this one is just as good as Looking for Alaska.

M. Molly says, "John Green said that Paper Towns was written as a response to Looking for Alaska. Do you see signs of this in PT? Also, does PT break out of JG's "Nerdy boy meets awesome girl who changes his life" equation (not that I mind it...)?"

Yes and no. In some ways the two books are similar. Two guys on the fringe of 'the-in-crowd' find a few wacky friends, two unforgettable girls to dream about and idolize, and thus "come of age". Both have humor and sarcasm in just the right amount. Both have their serious and meaningful layers. Where they differ, in my opinion, is in the mixing. Looking for Alaska is very bittersweet, very contemplative. And Paper Towns has this too. But it's not as bittersweet. It's a bit wackier than Looking for Alaska. Miles and Quentin are not mirror images or anything. Quentin has enough of a personality--as does his friends and dream-girl--to make this one unique. It is not Looking for Alaska part two. But if you boiled it down to the basics, it would have many of the same ingredients, just in different amounts.

Suey says, "I 2nd everything everyone's said about Paper Towns. Dying to know if it's like his others. Better maybe even?"

It's good. It's very good. I won't say I think it's the best, best, best book ever written. But it's definitely one of the better books I've read of YA published in 2008. It would make my top ten list--so far at least--for YA novels published this year. I can't say it's better necessarily. But I can say it met my expectations. I expected really good work, and it delivered. I was surprised by Looking for Alaska. I read it before it was published. It was his first book. I didn't know quite what to expect. And it just blew me away, I thought it was one of the BEST books of the year. So it's hard to match my enthusiasm and passion since with this one I went into with different expectations.

Melissa asks, "Trying to say something different about Paper Towns: how does it compare to his other two? Better? Worse? Different? Do you think that his style works well for the story? (I don't even know the story!)"

I think Green is great at coming-of-age stories about awkward guys who come into their own and get comfortable with who they are and what they want. And he's great at depicting the highs and lows of teen life. The best and worst and most embarrassing. He definitely is a great storyteller.

I haven't read An Abundance of Katherines, but I thought this one was just as good as his first one, Looking for Alaska.

Joy Renee asks, "I'm interested in the technique and art of storytelling itself so anything along that line would interest me. My questions are for any or all of the fiction titles in your list:

How was Point-of-View handled? Was there a single POV character or did it alternate among two or more. Was it always clear whose eyes and mind were filtering?

It was written in first person. And I think this was an effective way to tell a very personal story.

How does the title relate to the story? Was it fitting?" It was very fitting. I can't really go into it all here because it would contain spoilers. I think if you *know* ahead of time what the title is all about, then you might approach the book differently. It's best just to go with it and learn as the character grows.

© Becky Laney of Becky's Book Reviews
Posted by Becky at 10:39 AM

Nice review! I loved "Looking for Alaska", so I look forward to reading this one. Thanks!

Oh Becky, do read Abundance of Katherines! It's brilliant!

I read the ARC recently and loved it. I love how he makes me laugh out loud but sweep me up into a fantastic story at the same time. It's hard to be literary, thoughtful, and funny at the same time, but he does it and does it well!

Ah.. I can't wait for this one! Lucky you for getting an ARC!