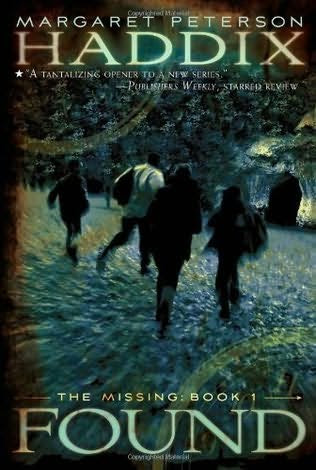 I may be a bit biased--slightly--since I love, love, love Margaret Peterson Haddix. My expectations were high with this her first book in a new series. And I was NOT disappointed. I was WOWed. I'm not foolish enough to think that this one will WOW every single kid, teen, or adult out there. But for those that love science fiction and mysteries...this one is for you.

Here's the opening of the prologue: "It wasn't there. Then it was. Later, that was how Angela DuPre would describe the airplane--over and over, to one investigator after another--until she was told never to speak of it again. But when she first saw the plane that night, she wasn't thinking about mysteries or secrets."

What Angela DuPre witnessed on her first day of the job was indescribably unbelievable. Perplexing. A plane that appeared and disappeared on the runway. A plane that she found minus the pilot and flight attendants. A flight were all thirty-six passengers were babies. Sounds crazy, right? How could an unscheduled plane--a plane that did not show up on any of their radars--land on their runway to begin with? How could it have gotten there without a pilot on board? Why babies? But even more strange was the fact that once the babies were unloaded, and the proper authorities called...the plane vanished into thin air. Angela DuPre witnessed the unbelievable alright. But she wasn't crazy.

The Found opens thirteen years later. Our hero is a boy named Jonah. He's got a best friend, Chip, and a slightly younger sister, Katherine. Our book opens with the arrival of several mystery letters. Two letters. Thirteen words. Lives are going to change.

"You are one of the missing."
and
"Beware! They're coming back to get you."

Found is a suspenseful, mysterious action-and-adventure novel that will thrill those that love science fiction. Of course I can't promise that it will "thrill" every reader. But I know it kept me reading. I couldn't put it down. And I was loving every minute of it. The pacing was just right. The characters were nicely developed--and are sure to improve upon with each novel that is published in the series. The only problem with the book is that it left me wanting more...wanting more now! I don't want to have to wait for the next novel to come out. I want to know what happens to Jonah and Katherine and Chip NOW! There's this intensity and immediacy that I just don't find in many other books.

well this one went IMMEDIATELY onto my wishlist. It sounds amazing and right up my alley. Can't wait to read it. In fact I want to go and get it right now!!

well i read it and it was an amazing and suspenceful book!!! i was bumbed that the other books have not come out yet so im going to go read the twilight series while i wait!!!

This book is really cool and interesting.At the end of the book it just kinda leaves you hanging. I was like totally mad that the second book dosent come out until next year.This is a really awesome book and you should totally read it.

this was one of my favorite books next to the twilight series. i totally cant wait for the next book to come out!i was mad at the ending cause it just left you hanging but it made me want to read the next one even more.

Hi this is a good book

OMG! I just got the book this morning, and I was hooked! I just finished it! I want to read the second one now!!!! Ugh! If it's true that it comes out next year, im totally mad now!

what down does the story take place in ?

I really enjoy Haddix's books; her Shadow Children series was thrilling, and this sounds very similar (in terms of thrill).

What is jonahs last name

I had to do a book report on this book and i realy loved it. I have read alot of her book's and hope to keep on reading her book's.

hey this is embarrassing but i'm doing a reading project and don't have time to finish the book because i'm like a super slow reader so can someone please tell me the ending.

I loved loved LOVED this book!

However I was extremely disappointed with the second one in the series. I found it very boring and filled with too many facts about the time and era they were in. It was almost like a tree house book but not even as good. What did you think?

I loved this book! I read the second one and cant wait to read the third one! How many books are there supposed to be in the series anyways?????????