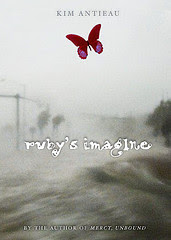 First sentence: A Butterfly the color of my name did tell me that a Big Spin was coming our way.

Ruby, our narrator, is a teen girl with a unique way of seeing the world, a unique way of talking. Let's just say--long story short--that she likes Capital Letters. (I can imagine that this will irritate some readers.) Her own way of speaking does set her apart from others in her New Orleans community, and it irritates the dickens out of the woman who is raising her, Mammaloose, her grandmother. "Mammaloose never hears my words as glad tidings. She says I is constantly putting a target on myself by using my Ruby words." (2) But her best friend, a young guy named Jacob Lazarus, JayEl sees it differently. He appreciates her in a way only a best friend can. One other thing I should mention, Ruby speaks with "Flying People" and "Rooted People." She has a very hands-on approach to nature, and loves to converse with the trees and plants and insects and birds.

Here's just a snippet so you'll see what I mean about Ruby's voice:

I walked the place where I lives--I calls it my Garden of Neighbors--down toward JayEl's Daddy's Corner of Happiness Store. Some people talks about what ward they lives in. I don't do that. I heard Mammaloose once say that calling where you lives a ward make you sound like you living in some kind of institution. I can only be agreeing with her. I says I is a citizen of the Earth and right now I be living in a place somewheres between the old oak next to the yellow-two-story and the gum tree out front of the pale green double shotgun. I lives in the place where the wisteria dips over the fence to hold hands with the magnolia that dips down to say hello to the Place Where My Vegetables Grow. That's where I lives. (11)

Ruby likes to give unique names to all the people and places in her life. In a limited way, I suppose, you could call Ruby a modern-day Anne of Green Gables.

When the book opens, Ruby has just been warned--by a butterfly, though later warnings come from other animals--that a "Big Spin" is on its way. That danger is coming. Danger with a capital D. And Ruby does warn a few folks as the days pass, but it isn't until the radio and TV start talking about a hurricane--a big hurricane--Hurricane Katrina--that folks really start listening. But listening doesn't mean acting, not necessarily. Ruby and her friends--some by choice, some not so much--do end up braving the storm right where they are, in their own homes.

And it is when the storm hits that Ruby's Imagine transitions from a slightly-irritating, slightly jarring book to a true page-turner. The more intense the action--the storm and its aftermath--the more "normal" Ruby becomes. Her speech, her thoughts, change and shift. In the heat of the moment at least, Ruby is too focused on surviving, on clinging to her friends and family, to "bless" the readers with her uniquely capitalized take on the world around her.

The second half of the book is a page-turner. It is here that the action begins to happen. Here where characters begin to develop, begin to matter. Here where family secrets get thrown to the surface. The book loses some of its foolishness and gets down to business.

The book--especially the second-half--is interesting and worth reading. It's not flawless. I can imagine some readers will feel *elements* of the story to be a bit unbelievable, a bit too coincidental. But at the same time, those elements feel good even if they're not quite credible. I can't go into details of exactly what I mean because it would spoil the story. But if you've read it, you'll probably be able to guess what I'm referring to.

© Becky Laney of Becky's Book Reviews
Posted by Becky at 9:30 AM