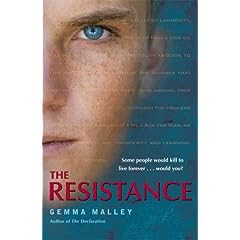 Malley, Gemma. 2008. The Resistance. (September 2008 Release) This book is the sequel to The Declaration.

Overhead lighting, harsh, bleak and uncompromising, shone from the ceiling down into the small room like a prison guard's searchlight, picking out every speck of dust, every mark on the cheap carpet, every smudged finger on the window sill. It was a room which, Peter suspected, had been used for many purposes; the ghosts of its former inhabitants clung to it like cobwebs.
'Tell me how Peter is. Tell me what he's been thinking about lately.'
Peter looked into the eyes of the woman sitting in front of him and sat back in his chair, circling his ring around his finger, the only possession he'd been found with as a baby.
The chair was padded, obviously intended to make him feel comfortable, to put him at ease, but it wasn't working. He rarely felt comfortable; Anna said it was because he liked to make things difficult for himself, but he wasn't sure. He figured that it just wasn't in his nature to feel too comfortable. Comfort made you lazy. Comfort was the easy option. (1)

Peter, Anna, and Ben are all technically legal now. All technically allowed to exist in society. All potentially eligible to sign The Declaration and begin taking the wonder-drug Longevity when they come of age. But will they? Could they? Ben is just a baby. His thoughts don't enter into the book at all. But for Anna and Peter there is a great dilemma. Do they become part of the society they hate? Do they assimilate with their former enemies? Do they turn their back on who they once were? Forget all they know about what it is really and truly like to be illegal, to be "a burden." To be a Surplus.

Peter and Anna are living as a couple. Young as they are, they seem to be more than just playing house with one another. There's Ben to look out for. And children of their own to start planning for. This need to procreate, to produce offspring of their own, is fundamental to who they are, to their cause. At least to Anna's cause. (If having a baby is a slap in the face to the powers-that-be, then Anna wants a dozen.) Each want to resist. Each want to play a role in the ongoing struggle between the current authority and the underground resistance movement.

Peter is getting ready to try something risky. Very risky. He's going to join the workforce, join the enemy--Pincent Pharma. He's going to accept the job his grandfather offered him. His goal is to learn how things work and leak that information back to the Underground.

We meet new characters in The Resistance. And we learn more about this world and how it operates. We learn more secrets. I won't go into all that here. It's best not to know too much going into it after all. What fun would it be to have the mystery out in the open too soon?

Anna's character seems a bit unbelievable to me. She seems a bit too certain, a bit too mature. A bit too comfortable at her new role. She's young--fifteen maybe sixteen--and she has the responsibilities of keeping her own house (cleaning, cooking, washing, etc), of having a husband (relationship issues, sex), and of being a mother to her brother who is only a year old. That plus the emotional/mental baggage she should be carrying around from her days as a Surplus. Anna seems a bit too put together to come from this reality. Granted, all of this know-how could have been drilled into her at Grange Hall so that it is in fact easy for her to manage it all and then some. Maybe this no-stress, no-pressure, no-complaining has been a part of her brain's programming. Could be. But there is no whining about how hard life is. How difficult it is to do it all...and on her own for most of the time since Peter is at work so much. Ben must be the best behaved baby in the world not to cause any stress or worry or frustration.

The quote is from the ARC, so there might be some differences between this and the final edition.