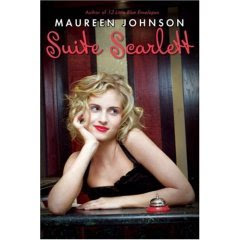 "The Hopewell has been a family-run institution on the Upper East Side for over seventy-five years."

"Perhaps it sounds like a wonderful thing to be born and raised in a small hotel in New York City. Lots of things sound fun until they are subjected to closer inspection. If you lived on a cruise ship, for example, you would have to do the Macarena every night of your life. Think about that." (15)

The Martin family has owned the Hopewell hotel for years--several generations--and they want to instill a good work ethic in each of their children: Spencer, 19, Lola, 18, Scarlett, 15, and Marlene, 11. As each child turns fifteen, they are given a suite within the hotel that is theirs to manage. When their suite is occupied, it is their responsibility to see to their guest's needs. Since the family is struggling economically, the family has entered a crisis period. Each handles the stress in their own way. Spencer, the oldest, is an actor. He is doing everything in his power to make a go of it. He goes to audition after audition after audition. His parents have given him a deadline: get hired--Broadway, TV, movies, commercials, anything, etc. Or face the facts and seek another career--enroll in culinary school. Lola has a steady job, or so she thinks, but will her love life prove to be her undoing? Marlene is a tyrant--no other way to phrase it. A cancer survivor, she thinks that that entitles her to rule the world. And Scarlett? Well, Scarlett is about to have a summer experience that will either make her or break her. She's just turned fifteen, just been given her own suite, and just had her first guest arrive. Mrs. Amberson. Life at the Hopewell will never be the same again.

There is a depth to the relationships and characters in Suite Scarlett. There's a good amount of humor as well. I think most will like this one, and some will even love, love, love it.

This book had me from the dedication. "This book is dedicated to anyone who has ever played a dead body on stage or screen. It takes a big actor to lie on the ground and keep quiet. Droop on, my lifeless friends."

Also of note, the author's bio on the jacket flap, "Maureen Johnson lives in New York City. She wonders if you have read any of her previous books: The Key to the Golden Firebird, the Bermudez Triangle, 13 Little Blue Envelopes, Devilish, or Girl At Sea. It's okay if you haven't; she is sure to like you anyway. Unlike Scarlett, Maureen does not live in a hotel, but she wishes she did."

© Becky Laney of Becky's Book Reviews
Posted by Becky at 10:56 AM

Great review! This sounds like fun. I've had a greater appreciation for "playing dead" ever since the HBO show "Six Feet Under."