Lady Emily Southwell, trained from birth to be the refined daughter of a duke, did the unthinkable. (2)

I had every intention in the world of loving this one. I did. When I heard there was a YA Regency Romance being published, I wasn't just vaguely interested, I was happy. I was eager. I love Regency romances, mostly. Austen. Heyer. Quinn. I'm so there. (Jane Austen, Georgette Heyer, Julia Quinn.) Another fun Regency title (for adults) that I discovered this year was Rules of Gentility by Janet Mullany. But this one just felt off for me. It felt a bit modern, a bit rushed, a bit silly, a bit underdeveloped. It's the story of four best friends who are preparing for their first season. Emily. Daphne. Priscilla. Ariadne. But for me, these characters weren't distinct enough to distinguish among. They all blurred together. Even Emily.

But even more problematic for me than the indistinguishable heroines is the plotting. It's flimsy at best. When Emily is told she's to marry a gentleman, Lord Robert, she takes an instant dislike to him. With no real reasoning, no real logic, she comes to the conclusion that Robert is a criminal. And she seeks to convince her three friends of this as well. Here we have the "mystery" element of the story. But for me, I had no proof other than the whim of an immature and often whiny "child" (disguised as a young woman) that Robert was a suspicious-- no, dangerous--character. Her only reasoning a) she doesn't want to get married b) he won't let her go to a Ball c) he thinks her paintings are silly. I can see why she might dislike him. But you can't logically jump from "I don't like you." to "I think you're a criminal." (There are plenty of people that I've met through the years that I've disliked based on first impressions. I've never once leaped to the conclusion that they must be a criminal mastermind. And then proceeded to try to prove it to have that person arrested.) The whole novel revolves around this must-prove-Robert-to-be-a-criminal plot. For this reader to find the book enjoyable, believable, there needs to be clues laid throughout the book--undeniable proof that crimes are being committed and clues and motivations and intent presented. There's none of that until the grand finale of a climax.

So as a mystery, it is a bit weak. When it comes to romance, well, it's a bit sudden and rushed as well. There is a hero--other than Robert--involved, but he seems to pop up and disappear erratically. He's a convenient hero. But he goes from mere acquaintance to soul mate a bit too quickly and without too much development. There is no wooing really. No scenes of courtship. Again Emily is just making a giant leap. My guess is that this hero-she-proclaims-to-love-truly is just a way to escape (and irritate) Robert. 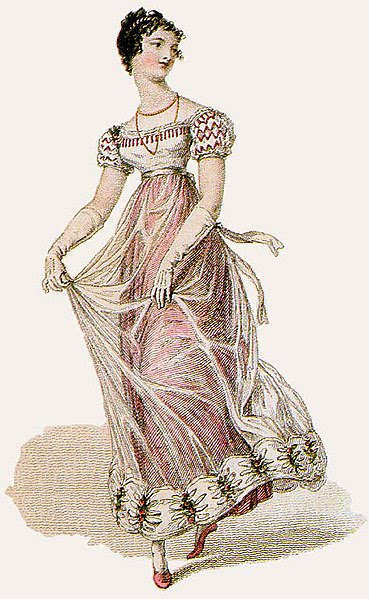 Initial thoughts on the cover: I know the cover is nice, pink and frilly. But it doesn't work for me at all. I see this cover and I don't think "Regency England" I think prom. (Or perhaps I think bride's maid. Or Barbie.) From the half-decapitated model with the glistening gloss on the lips to the wispy wavy hair and the strapless--yes, strapless--pink ball gown. It looks like something from David's Bridal. When I think Regency, I think empire waist gowns. I think most people do. True, I just did a fact check which said that waistlines were lowering and tightening by around 1825, but still this dress doesn't feel right for the era. This image is, for example, from 1823. I don't think the cover will turn away many readers, in fact it may draw in modern readers. But for me, personally, the cover did some damage to the legitimacy of the book. I don't blame Scott for this, however, since covers are rarely the design or brainchild of the author. Her other novels, all adult Regency novels, have fashion appropriate enough for the era.

For fans of Luxe and Rumours, this may work as "historical" fiction. But it didn't quite work for me.

Note: There are three factors that might bias my review a bit. 1) The cover. It's awful. 2) I read this book over a period of three weeks. A chapter or two at a time. This can taint a reading. It might be why I found the characters so indistinguishably whiny. 3) I've read several Austen novels, several Quinn novels, and several Heyer novels this past year. It's hard to go from the really really good stuff to something that feels a bit mediocre without making some comparisons. But one could easily make the argument that a 12 to 14 year old is a lot less likely to have a familiarity with Austen and Heyer and therefore would not find this as lacking.

The good news? I am almost exclusively finding positive reviews (on the blogs) for this one. Apparently, I'm the only one that read this and had a Miss Cranky Pants reaction.

Other reviews: The Story Siren, Genre Go Round, Trainspotting Reviews,

I'm with you. Or, I'm sure I would agree with all of your criticisms if I had managed to finish the book. But as far as the cover and the blandness of the four friends? Completely agree. And the writing just seemed so...forced.

Don't know about the appeal to Luxe/Rumors fans, though, since I don't think this has the same addictive soap opera quality as that series. You know, no backstabbing best friend or anything. I'm thinking more Bewitching Season by Marisa Doyle.

That said, I agree with your 3rd note, re: having read "better" (in our opinions) Regency romances made us a tougher audience, but teens may not have the same biases.

Excellent, now I can take one book off of my reading list without even having to struggle through the first couple chapters. Thanks!