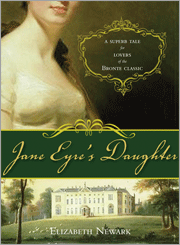 The oak pulpit rises high above the congregation.

I had *every* intention of rereading Jane Eyre before tackling this literary spin-off, Jane Eyre's Daughter. I've only read Eyre once, and that was way back in the fall of 2001. [You know, the semester that was difficult both personally (grandfather's death) and nationally (9/11).] And I still *plan* on rereading it if there's time this fall. It made it to several challenge lists including Carl's R.I.P. III. But when I got the email from the publisher saying that I should post my review as soon as possible, I decided that it was not the time to go traipsing down memory lane just because I'm a perfectionist.

What can I say about Jane Eyre's Daughter. The style. One of the reasons I'd hoped to reread the original was so that I could compare the two styles. To see if this one attempted to echo the original in literary style. I can't be the judge of that (at least not yet.) But I can talk about it all on its own. I found the style to be purposefully put-offish. Let me rephrase that if I can. The narrator has a definite attitude, a definite flair that could be put-offish if you were to meet her in real life. She's definitely not meek or weak or waiting for Prince Charming. So that's what I meant, the narrative reflects the narrator. The style seems to be a distancing one. It's written in first person past tense, and that in and of itself creates distance between the reader and the characters or the reader and the action. As such the action isn't immediate either. What we're "reading" is a reflective narrative. We're being fed a story. Perhaps passively aggressively.

The characters. I liked elements of Janet's character. Was put off by some other elements. Found the family scenario to be odd if I'm quite honest. Which might be expected. Jane Eyre definitely was surrounded by dysfunction. And Mr. Rochester was definitely one odd guy--with good reason. So perhaps it's only natural that instead of a normal, loving family we've got one that has some flaws.

This is just a minor spoiler, so maybe you're brave enough to keep reading. One of the major "ick" factors in this book is Freudian in nature. Janet Rochester seems to be--and conscious of it too--in love with her father. She sees him as the perfect, perfect man. She imagines what it would be like to be in bed with her father, to be held in his arms. In other words, she wishes she was her mother. The man she ultimately falls for in fact is a man who looks to be an exact copy of her dear old dad. So much is this resemblance that she thinks for a good many chapters that he might be her half-brother. Still she loves him anyway. The scenes where she gushes about her father in a very romantic, almost sensual way were very squirmily icky.

Her relationship with her mother. Jane Eyre is shown to be a loving mother...except when it comes to her daughter. She loves her son, adores her son. He's her constant companion. But Jane Eyre just can't seem to like her daughter. Can't seem to love her daughter. As her daughter matures, she senses that she has a would-be rival for her husband's affections. She's jealous of any time they spend together. So she's very uptight and distant (read that *bitchy*) with her daughter, and a bit doting and overprotective of her son. His name is Oliver by the way.

But her parents are really very minor characters. Almost immediately, the whole Rochester family--minus the daughter--is tossed out of the book and sent on an extended round-the-world vacation. They essentially pack up everything, lease Thornfield, and tell their daughter..."we'll be back in three or four years. Don't get married until you're twenty-one." She's fifteen (maybe sixteen) when they leave. She's first sent to boarding school. Then sent to live with Colonel Dent after she graduates from finishing school.

The tone of Jane Eyre's Daughter is sufficiently gothic. There are secrets, lies, mysteries, romance, and a general uncomfortableness that feels appropriate for this Bronte spin-off. The mystery isn't as spectacularly shocking as the big reveal in Jane Eyre--crazy woman in attic--but the well-intentioned echo (this time in Colonel Dent's home) is intriguing in its own way.

I won't go into all the details, but it was a semi-satisfying read. I think it was well written, but for me, I didn't like some of the places this novel went. I think other readers might enjoy it more. Especially for fans of gothic romance with spooky settings and creepy tones. (Though I must applaud the fact that at least it wasn't sexually graphic. It could have been much much worse.) It was better than I expected.

© Becky Laney of Becky's Book Reviews
Posted by Becky at 7:49 AM

Sounds like this could be an interesting read. I loved Jan Eyre when I was younger, but it has been years since I read it. I might have to tackle both of these soon.

That thing about Janet and her feelings for her dad is a bit creepy. I enjoyed Jane Eyre, and while I'm not one for reading too many spinoff-type books, I might check this one out.

--Anna (Diary of an Eccentric)

Ok, I was really interested in this book until your minor spoiler. Too creepy. But it's a great review nonetheless.

Yeah, there was definitely an icky-creepy factor there.