Mary Ingalls On Her Own 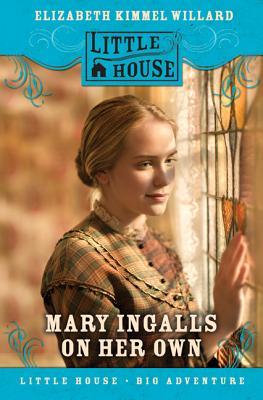 Willard, Elizabeth Kimmel. 2008. Mary Ingalls On Her Own.

"Mary Ingalls stepped carefully from the train onto the bustling platform in Vinton, Iowa. She stood straight and quiet, her hands clasping the handle of her small suitcase. Her pale blue eyes shone with a mix of anxiety and excitement. Mary took a deep breath as the cool November breeze fanned her flushed cheeks and carried the hot smell of engine steam past her nose."

The novel, Mary Ingalls On Her Own, opens with Ma and Pa and Mary arriving in Vinton, Iowa. They have brought their daughter to blind school, a college for the blind. Everyone in the Ingalls family has worked so hard in order to provide this opportunity for Mary. And Mary know she is fortunate and blessed to be here. Her emotions on this day are mixed. Feeling sad to be leaving her family behind, to be leaving Laura behind. Laura has been her best friend, her confidante, her "eyes" for years now. Yet she feels the need to prove herself, to gain independence, to try her best at this new venture. The novel only spans two months, perhaps even a little less time. (From her arrival on that November day--we're not told when in November she arrives--to Christmas Eve/Christmas Day. During this time Mary has her moments.

Adjusting to life on her own in this new environment isn't quite as easy as Mary thought it would be. She does have two great roommates Hannah and Blanche. However, she also has one grumpy neighbor, Mattie, a girl who is only partially blind. And this young woman is going to try her patience something fierce. Mattie sees Mary as being a GOOD GIRL. Interpret that as being a goody-two-shoes or self-righteous or stereotypically perfect. Mary does have to wrestle with that image. She doesn't feel like a good girl. But she's aware that others have always had that image of her. She's not sure how she's projecting that image so much, just that it must stem from the fact that she doesn't speak without thinking. She's not prone to putting her foot in her mouth. Or giving way to anger. Or really letting people have it.

As for the plot, not much happens. That's not being rude. There are a few things now and then that "happen." But this one is about exploring the inner thoughts of one character. The emphasis is on character growth in other words.

For those that can't get enough of Little House, this one might be for you. One of the things I enjoyed was seeing little facts or details from the other novels turn up. References to what Ma, Pa, Laura, Carrie, and Grace were doing. References to Mary's past and their present as well. For example, we hear by letter from the family occasionally giving updates. And if you've read the other books cover to cover, you know where that fits in here. So that was fun.

Sounds interesting. It IS curious what happened to Mary and what she experienced. That's a cliff hanger left over from the Little House books.

Thanks for bringing this book to my attention.