The Diamond of Darkhold 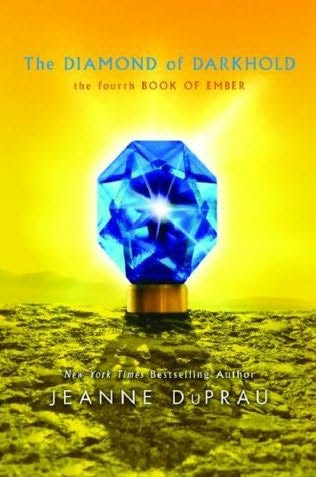 The Diamond of Darkhold is the fourth in the Ember series by Jeanne DuPrau. It begins shortly after the close of the second book in the series, The People of Sparks. The Emberites--now on their way to becoming full citizens of Sparks--are struggling side-by-side with the people of Sparks (their former enemies) to survive the harsh winter months. In the midst of this struggle, a roamer comes to town. Maggs, a woman roamer, a shepherdess, comes to barter, but with food being so precious, she's having a hard time of it. Until Lina and Doon spot something even more precious to them than food. A book. Well, remnants of a book anyway. Just eight pages in length, the book catches their attention because its title reveals that it is for the people of Ember. Further study proves that it this book is an instruction book for the people of Ember. But with just the last eight pages in place, who could ever puzzle out its meaning?

If you've read the first book--and chances are you have else you wouldn't still be reading this review--you know that Lina and Doon have experience in solving difficult and mysterious and seemingly impossible puzzles. Knowing that no adults in Sparks would give their approval to these two kids' crazy plan, Lina and Doon make secret plans to leave Sparks and head off to a place they thought they'd never see again. A place they fear will have long lost sunken into darkness. The city of Ember.

Can these two kids return to Ember and discover just what this book is all about? Can they make sense of this mystery? Can their journey lead to a discovery that could ultimately decide the fate of every man, woman, and child in Sparks? Can they save the day...again?

While The People of Sparks and The Prophet of Yonwood are more about ideas and philosophies, this one is pure action and adventure. More action, less philosophy. Less ambitious themes, more exciting pace. So in a way, perhaps, it is less thought-provoking than its predecessors, but in some ways, I think it is more satisfying for most readers. (Less moralizing going on, for example. Am I the only ones that see these books as being heavy in messages???)

I've seen a review or two of this one already. And I don't remember which one it was that mentioned you didn't need to have read The Prophet of Yonwood to make sense of this one. I'm not sure I entirely agree with that. I think you can enjoy 98% of the novel without having read the other, but there are a few elements especially in the novel's closing that only really make sense if you've read Prophet of Yonwood. The more important question may be is it necessary to have read the other books in the series recently. Confession time, I read The Diamond of Darkhold days within receiving it in the mail. I found it less than satisfying. Especially the last quarter of the book. Especially especially the ending. But I determined that this was probably due to the fact that it had been a while since I'd read the trilogy of books that precedes this one. So I went to my local library and checked out those three books--The City of Ember, The People of Sparks, The Prophet of Yonwood. I read them again, all right after one another. And then I picked up The Diamond of Darkhold. This second time it proved to be an entertaining and satisfying read. I needed a reintroduction to make this one really work. That's not to say that every reader would need this immersion process...maybe your memory is better than mine...a lot better than mine. But I'd suggest rereading the other books. It won't be a waste of time because they're all (mostly) enjoyable books.

For more on Jeanne DuPrau and her latest book:

© Becky Laney of Becky's Book Reviews
Posted by Becky at 7:43 AM

I did think they were message heavy, but I thought that added depth. They were entertaining through it all, and not preachy, so the message, I thought, made the worlds seem real.

Thanks for telling me to re-read the series. I liked Diamond, but felt it was a little light, compared to the others. A fast, fun read. So I will read them all over and see if that makes a difference.

Well, I haven't read any of the other books and was completely engaged by this story. I didn't miss what I'd missed! LOL

Becky (the other one)

i thought that it was an interesting and exiting book. It definitely had lots of lessons. I think that doon was really brave to stand up to trogg's family like that.