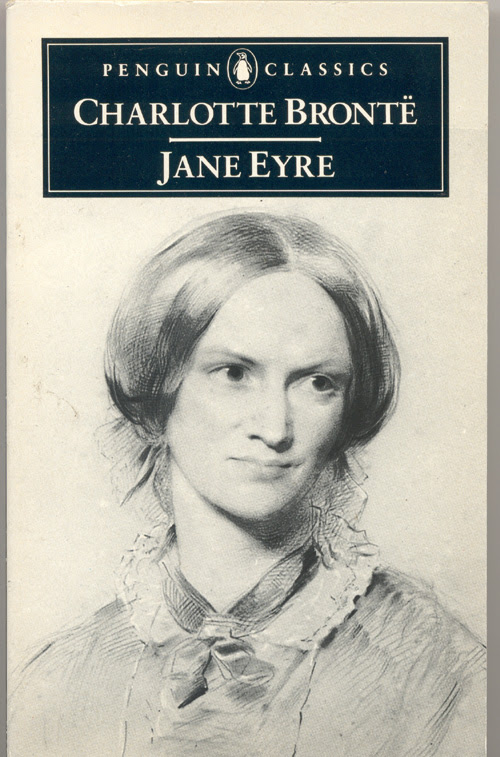 There was no possibility of taking a walk that day.

I was a bit of a skeptic. I didn't think it was really and truly possible for me to love Jane Eyre. Didn't I try to read it as a teen and give up on it halfway through? Didn't I try to watch some rather bad movies of it in college? Surely, I'd given it my all and Jane Eyre just wasn't my thing, right? Wrong! (Now that I think about it, I think the main prejudice I had against it was that I hated Wuthering Heights (which was required unlike Jane Eyre) and it was by a Bronte.)

I wanted the adult-me to give Jane Eyre a try this year. I put it on several challenge lists. (Nineteenth Century Women Writers, Herding Cats, 1% Challenge, Classics Challenge, Daring Girls Challenge, Bronte Sisters Mini-Challenge, R.I.P. III Challenge, Fall into Reading 08, etc.) I unburied it from the depths of my classics which hadn't seen the light in a good number of years. But I kept putting it off and putting it off. With somewhat good reason. Carl's R.I.P. III challenge. I didn't want to read it too soon. Before I started this one, I made the decision to check out the latest Jane Eyre movie (2006) from the library. I watched it. I loved it. I didn't just love it. I loved, loved, loved it. And then I picked up the book. And guess what, I loved it too! The movie was great because it was well done and entertaining. Little did I know--at the time--that the dialogue, the script, was lifted largely from the book itself. But when I began reading it I saw just how true-to-the-book the script was in many many ways. (I'm not saying that it was the most perfectly true-to-the-book movie ever made. But it is far closer than most attempts I've seen. Much closer than say most of the Austen movies I've seen done recently.)

Jane Eyre is the story of Jane Eyre, obviously. We first meet her as a ten year old living quite unhappily with the Reed family. Her uncle made his wife, Jane's Aunt Reed, (boo, hiss) promise to look after the child, the orphan on his death bed. She might have said and said and said those words, she said them but she lied them. Jane is treated differently from her cousins--Eliza, Georgiana, and John. They're all dreadfully spoiled and horrible. And she's, well, they call her the spawn of the devil, they're forever going on about how she's going to go to hell because she's an evil, spiteful girl. She's soon sent away to school, to Lowood. She has plenty of rough times there, but she does see kindness for really the first time. She meets a teacher who is sympathetic. And she gains and loses a best friend, a Helen Burns. (She dies.)

We then fast forward quite a bit of time. We next meet Jane when she is eighteen. She is now a teacher at Lowood herself, but she wants more from life. She advertises to be a governess, and she's hired by a Mrs. Fairfax. She's on her way to Thornfield, to care for a young French girl, Adele. She has no idea that Thornfield (and its inhabitants) will change her life forever. For one thing, she doesn't know of Mr. Rochester's existence. And even if she did, she couldn't possibly dream that her employer would take an interest in her, an honorable interest in her at that.

Plain Jane Eyre, the governess, the woman who feels most at home working behind the scenes is in for a pleasant surprise or two upon meeting Mr. Edward Rochester. He's an ugly sort of person himself--on the outside--and he's not that easy a person to read. He's got secrets. Lots and lots of secrets.

This one is just right for Carl's R.I.P. III challenge, while I'm sure most of you know the mysteries and secrets lodging within the book, I won't spoil the book here.

I understand your prejudice. I didn't enjoy Wuthering Heights either. But I'm glad that like me you ended up loving Jane Eyre!

I read Jane Eyre in grade school. I honestly don't remember anything about it. I'm adding to my list to re-read.

I, too, first read Jane Eyre in elementary school -- but I loved it. I've read it many times since. The mystery of Grace Pool was great! I haven't found a movie version to my liking, but I haven't seen the new(ish) one you mentioned. Hummm, I see an addition to my Netflix queue.

Yay!!! This is my favorite book and am so glad when someone else loves it too. (Wasn't the movie something?!)

I love love loved that version of Jane Eyre, too! It was awesome, definitely a favorite. As a child I remember my mom watching the older ones and it turned me off to the whole thing because it was so overly dramatic and depressing. I studied the book as an assignment when I was a teen, though, and loved it!

I'm reading through it now, too. :-) I've been posting my thoughts on it as I go, which is fun. And I've found some awesome illustrations, too.

Oh I loved that book too and really want to see that movie. I just recently read Jane Eyre too for the first time. I too had refrained from reading it earlier because I didn't like Wuthering Heights either. Hhahaha..that shows us, huh? If you liked this movie, try watching the movie of Great Gatsby that has the actor playing Rochester who plays Gatsby. SO good.

I am will have to check out this movie version! The one with Timothy Dalton was hard for me because I kept seeing him as James Bond.

I've never read Jane Eyre but after having read your review I think I might give it a try. :) Will also have to check out that movie.

Now you get to read The Eyre Affair by Jasper Fforde! You must!

=D Yeah, I hated Wuthering Heights also. But I did end up liking Jane Eyre. You sure covered a lot of challenges with this one!

Thanks for the review!

LOVE LOVE LOVE Jane Eyre! My favorite book.I first read it when I was 15, and I have read it over and over throughout the years.I haven't found any other book that stands up to this one!

The 1996 version is the best. I think its way better than the 2006 version. Its more how I pictured it! make sure to see it!

Love this book!What a smug satisfaction I felt after reading it!

I'm in high school and I have to read the for an AP class and I read the first chapter and was kind of bored of it but since I read your review I really want to give this book a chance!! Thank you (:

I purchased a copy of Jane Eyre at a recent book sale, with intention of reading it. After reading this review, I'm VERY much looking forward to reading the book!

My story is similar to yours. I remember reading Jane Eyre for school and truly hating it at that time. I watched the 2006 TV-Movie version starring Ruth Wilson and fell in love with the movie. I watched it on DVD recently. Following that I also watched the 1996 Movie version starring William Hurt and Charlotte Gainsbourg. Although I liked Charlotte as Jane Eyre the movie was bland not half as good as the 2006 version. I am presently reading the book. I totally love the book. I think you need some maturity to like Jane Eyre. And thank you for your post on this.

I was eleven years old the first time I read Jane Eyre and I absolutely LOVED it (although I'm almost positive that at that time I didn't understand all of it), and I have read it at least twice every year since then. I read Wuthering Heights before I read Jane Eyre and, candidly, I like Wuthering Heights better! Anyway, I agree with you about the 2006 version! Toby Stephens was amazing as Mr. Rochester!!

I bought this book the other day along with other classics