The Road Of Lost Innocence 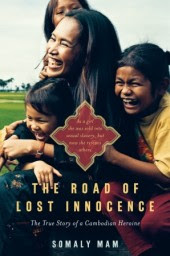 Mam, Somaly. 2008. The Road of Lost Innocence: The True Story of a Cambodian Heroine.

Powerful. That is one of the best words to describe this heartbreaking memoir of Somaly Mam. Here is how it begins,

"My name is Somaly. At least that's the name I have now. Like everyone in Cambodia, I've had several. Names are the result of temporary choices. You change them the way you'd change lives. As a small child, I was called Ya, and sometimes just Non--"Little One." When I was taken away from the forest by the old man, I was called Aya, and once at a border crossing, he told the guard my name was Viriya--I don't really know why. I got used to people calling me all sorts of names, mostly insults. Then, years later, a kind man who said he was my uncle game me the name Somaly: "The Necklace of Flowers Lost in the Virgin Forest." I liked it; it seemed to fit the idea of who I felt I really was. When I finally had the choice, I decided to keep that name as my own. I will never know what my parents called me. But then I have nothing from them, no memories at all." (1-2)

The book is compelling, gripping, raw and intense, straightforward, and above all else heartbreaking. Her story is powerful in that she survived despite it all; amazing in that she had the courage and strength to go back, to face her demons; inspiring in that she had the determination and heart to do something--to make a change, to become a hero, to take a stand.

Hers is the story of an unloved child. A child broken, beaten, abused and misused in countless cruel ways by the adults in her life. The story of how she was raped, sold into prostitution, endured the unimaginable--years of prostitution against her will, thousands of rapes, thousands of beatings, unimaginable punishments by the brothel owners if she didn't "perform" to their satisfaction. A story that is heartbreaking not only for what she endured, but for what everyone around her endured as well. She was not the only one. She wasn't one of few. This treatment, this abuse, this cruelty, this horror is common. Her story highlights just how abominable and cruel and evil humanity can be. The lack of humane treatment. The lack of justice. The lack of compassion. The lack of human decency and respect.

"It's still happening, today, tonight. Imagine how many girls have been raped and hit since you started to read this book. My story doesn't matter, except that it stands for their story too, and their stories are why I don't sleep at night. They haunt me." (61)

Somaly Mam was able to escape her life of prostitution--though it wasn't easy, though it left her scarred emotionally and psychologically. And after a time--with a little help and support, with some training and a boost in confidence--she was able to face her past and make the decision that would change lives. She'd return (with her husband) to her home country to make a change. To seek out those girls that just like her were sold into prostitution, that were abused daily, that were unloved, unwanted by their families, their society.

This book is heartbreaking to read, but I feel it is important. Definitely recommended.

© Becky Laney of Becky's Book Reviews
Posted by Becky at 11:33 AM

Thanks for the wonderful review, Becky. Does sound like a tough read, but it's definitely going on my to-read list.

Wow. I agree that this sounds powerful. I'm adding this to my list as well. Great review!

From what i have read here i feel that now i can go on and do my website on traficking and sexual exploitation. I have been wanting to get it out of the way, but i thought that if i explored the internet that i can get more detailed and more connected with my work. I am in the eigth grade and i live in athens georgia.... and yes i do enjoy learning about theese type of things you can get out there and do something about.

I am so thankful of your review. I am have not even read the book yet, but from your review i feel very interested in the book. Hopefully I am able to read the entire book.