The Darcys & The Bingleys 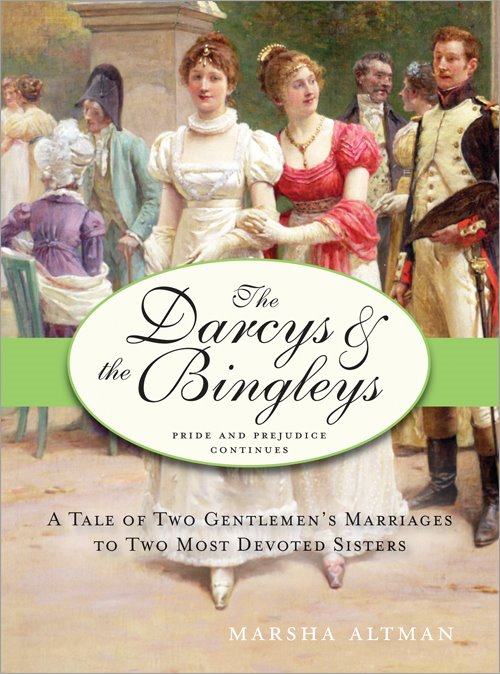 Altman, Marsha. 2008. The Darcys & The Bingleys: Pride and Prejudice Continues: A Tale of Two Gentlemen's Marriages to Two Most Devoted Sisters.

Without a doubt, The Darcys & The Bingleys is a good book. As a sequel to the original novel by Jane Austen, people may be wary. After all, some are of the opinion 'the more the merrier' and welcome all prequels, sequels, companions, and retellings. Others have their reservations and look down their noses on authors that dare to try to walk in Austen's shoes. And then there are a few of us--myself included--that wish that there were books that could do justice to the original. We hope Austen-related books are well-written, but often are disappointed. Yet still the hope lingers on (however small) that a good one can be found among the many wanna-bes out there.

The Darcys & The Bingleys reads more as three short novellas. (Though it isn't arranged that way at all. The narrative just has three distinct stories that slide together.) The book is told from multiple perspectives: Charles, Darcy, Jane, Elizabeth, etc.

The first part of the novel begins a few days before the double wedding ceremony of Charles and Jane and Darcy and Elizabeth. This portion has a few potentially squirmy sections as Bingley seeks out his best friend for some advice. He has some questions about the wedding night. Darcy, dear that he is, won't really talk about that. But he will gift his friend with a book (The Kama Sutra) on the matter. While that book plays a small role in the book, Bingley's surprise at the illustrations for example, it is rather refreshing and quite a relief that once the ceremony takes place, the reader is left outside the bedroom door. The intimate details of marriage are left to the readers' imagination--if they choose to go there--and we're not "blessed" with them.

The second part of the novel focuses on the first pregnancies of Elizabeth and Jane. They're both expecting at the same time--and deliver about a week or two apart, I believe. The men are in competition--who will deliver first, what sex the babies will be, etc. They are both ecstatic at the idea of becoming dads. This occurs around Christmas and New Years, and they are all together at Pemberley.

The third part of the novel occurs about a year (maybe a little longer) later. Charles' sister, Miss Bingley, wants to be married to a Lord Kincaid. But Charles has reservations. He seeks out his best friend, Darcy, to obtain his opinion. Darcy and Charles set off for London to meet the fellow and investigate him. And if the situation arises, to prevent the marriage from taking place. Jane--expecting her second child--is left behind with Elizabeth for company. This part of the novel seeks to give depth to Miss Bingley as a character. And it also seeks to illustrate the close friendship these two men share.

I won't go into details on how the situation resolves--if it is resolved--but I will say this, the book is good and well worth reading. The book is true to the original as far as characters and social conventions. There is NO premarital sex, for example. And there are no graphic sex scenes after marriage either. If you've been frightened away by Linda Berdell's books, you'll find these to be the exact opposite: well written, true to the book, and entertaining. (I stomached part of one of her books. The second sequel actually. And I found the fact that she had Jane and Charles so miserably married--him cheating on her and bringing an illegitimate child into the world--simply unacceptable. She did the Bingleys a great disservice, Jane and Charles both lacking in love, common sense, and heart.)

Sounds interesting, Becky. Thanks for the review. I've actually enjoyed Carrie Bebris' cozy series, in which the married Elizabeth and Darcy solve mysteries. I think they stay pretty true to the spirit of Austen's characters. I've read the first three - the fourth is just out in hardcover.

Wow, there sure are a lot of P&P sequels out there. Sounds like a good read.

I just finished reading this book and really couldn't put it down! It's a great sequel that is true to the originial finds its own identity as well. I would recommend it!