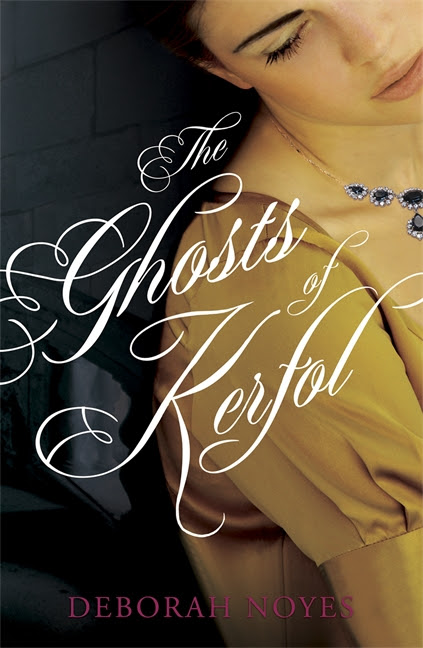 The Ghosts of Kerfol is an enjoyable short story collection that pays tribute to Edith Wharton's short story "Kerfol". I'd encourage you to take a few minutes (about ten or twenty actually) and read this haunting story about an old-and-creepy manor. The Ghosts of Kerfol is a collection of five short stories: "Hunger Moon," "These Heads Would Speak," "The Figure Under the Sheet," "When I Love You Best," and "The Red of Berries." The first two especially--"Hunger Moon" and "These Heads Would Speak" pay tribute to Wharton's original story. The remaining stories are imaginative what-ifs that bring the story into the modern world.

The original story is a story-within-a-story. Kerfol is the manor in question. The framework of the story is about a person (I don't think it says if it is a man or woman; if it did I missed it) who is considering buying Kerfol. The narrator is there at the estate exploring the grounds and hoping for a closer view of the house itself. But the narrator keeps seeing a handful of dogs around the place. We later realize--along with the narrator--that these dogs are ghosts. That one day a year--on the terrible anniversary--they appear. The guardian and his daughter always leave that day to avoid the creepy factor as much as possible. The narrator then reads an account of the history of Kerfol.

This second story, the inner story, is set in the seventeenth century. It involves an old man and a young woman in a "seemingly" "happy" but childless marriage. Happy if you think such a thing is possible when the woman has no freedom to move about on her own even on her own estate in and about her home, her gardens, etc. Sensing on some level at least her loneliness, he buys her a dog. What happens next isn't pretty. One day he becomes jealous and he strangles her dog. And it only gets worse from there. Believe me. Dog-lovers will be crushed at the cruelty. But the husband does get his comeuppance, he's murdered--and according to his wife's claims--by these dead dogs of hers.

The story isn't pretty. It's melancholy at best. And the stories crafted in The Ghosts of Kerfol are bittersweet and haunting. The first, "Hunger Moon," re-envisions the second story (Yves de Cornault and Anne de Barrigan) as told by a servant girl, a waiting woman. The second story, "These Heads Would Speak," is about a young man visiting the estate. He's there while his mother seeks to straighten out his inheritance. Anyway, this story parallels the frame story of the original in a way.

The remaining stories interconnect with the previous and the original. It was a well-crafted book. The creepiness was perfect. I enjoyed all the stories.

© Becky Laney of Becky's Book Reviews
Posted by Becky at 10:15 AM

I haven't read that story by Wharton, but I think both sound interesting. I like creepy, dark stories. Thanks for drawing my attention to them!

--Diary of an Eccentric