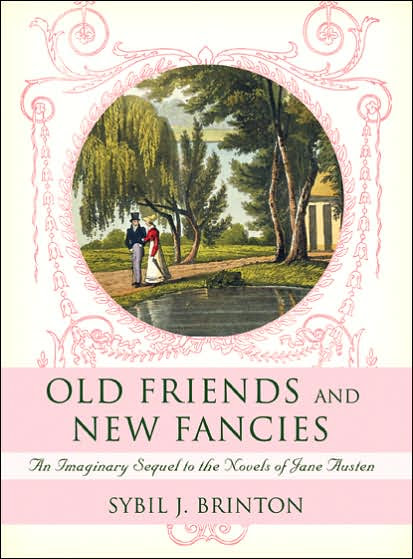 Originally written in 1913 (published in 1914), Old Friends and New Fancies is the first Jane Austen sequel ever created. It has been newly published by Sourcebooks. The book is a first in many ways. It is unique too. It is a sequel to all SIX Jane Austen novels: Pride and Prejudice, Persuasion, Emma, Mansfield Park, Northanger Abbey, and Sense and Sensibility. You'll find several of your best-loved and best-love-to-hate characters within its pages.

At its heart, Old Friends and New Fancies is a love story. A book all about the ups, downs, twists, and turns of courtship--Austen style. Misunderstandings abound!

I especially loved to see how Mrs. Jennings, Lady Catherine de Bourgh and Emma Knightley are still causing trouble--intentional or not.

The book is essentially concerned with four would-be-pairings. I hesitate to tell you too much. After all, half the fun is seeing which pairs Sybil Brinton imagined being compatible. There are two primary narrators, however, in the book: Georgiana Darcy and Elizabeth (Bennet) Darcy. (Other viewpoints are shown. And it is more than just those two, but over half the book at least are those two.)

Oh, it sounds like fun! I'm so glad you liked it, now I'm really looking forward to it! Thanks, Becky! ("Sequels" can be such a touchy matter... )L.

This sounds like a really good one. I had never heard of it.

(gasp) Love this book! One of the tops when it comes to Austen Fan Fiction. :)

Definitely going to check this one out.