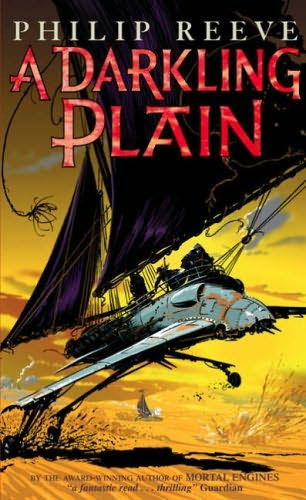 Theo had been climbing since dawn; first on the steep roads and paths and sheep tracks behind the city, then across slopes of shifting scree, and up at last onto the bare mountainside, keeping where he could to corries and crevices where the blue shadows pooled.

I don't know if A Darkling Plain was all that much longer than the previous three books in the Hungry City Chronicles, or if it just felt like it. The book is a direct sequel to Infernal Devices. In many ways this is where it all happens, where it all goes down. All the books leading up to this point, this big showdown between warring powers. More action, less set-up. And action is good, right? But here's the thing, I personally liked the less climatic but funnier books which set this one up. That's just me.

There are so many characters--some we've known all along like Stalker Grike, Tom Natsworthy and Hester Shaw; others are newer to us like Wren Natsworthy, Fishcake, and Theo; some have been renamed like Lady Naga; others are completely new. (And let's not forget my personal favorite, Pennyroyal). And the plot is so complex. I'm not even going to try to go there. Needless, to say the "fate" of Earth is to be decided upon in this final book in the Hungry City Chronicles.

I will spend a few minutes, however, trying to convince you that you should read the series for yourself. I liked this series for the most part. The characters were well done. No character was all good or all bad. Most of the 'bad' guys had something about them that made them just a smidgen likable. If not likable, at least understandable. I don't know about you, but one of the things that drives me crazy is when bad guys are bad for no reason. When writers fail to develop these villainous characters, when they expect us to buy into the idea that they're evil incarnate pure and simple and without any humanity at all. The characters are complex. And that's a good thing. No where is that truer than in the case of Hester Shaw, a true love-to-hate, hate-to-love mess of a character. We're conflicted because she's conflicted. The characters are also memorable. Good, bad, or somewhere in between, I don't think I'll be forgetting Pennyroyal or Grike anytime soon. I liked the humor. Yes, this was serious end-of-the-world type drama, but there were enough purely funny moments that it was a delight to read. Mind you, I wouldn't want to live in this world! Bad things can and do happen. The books also had plenty of action and drama. I'm not all-about-action, I'm more character driven than plot driven...but I know plenty of readers who want fast-moving plots--action and adventure and danger and the like. This book had it and then some.


© Becky Laney of Becky's Book Reviews
Posted by Becky at 8:07 AM

You really summed up the reason why I stopped reading this series after this book. All the actual action happens, but I loved the slower-paced character driven books better!

Really glad you liked the series, I loved it when I read in a couple of years ago.

It seems Philip Reeve has written a prequel - "Fever Crumb", to be released this year. According to Wikipedia: "A prequel set a generation before the Mortal Engines quartet concerning Dr Crumb's daughter, Fever." L.